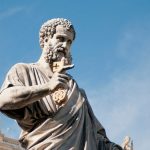 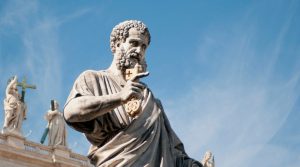 In a previous post, I considered Newman’s first grounding principle in Idea of a University:  teaching universal knowledge as the essence of a University.  His second core principle central to his Discourses is that, in practice, the University depends upon the guidance of the Church. A University “cannot fulfill its object duly … without the Church’s assistance… the Church is necessary for its integrity” (3). The object of a University is to form minds in the truth. According to Newman, this object is essentially “intellectual, not moral” (3). However, in order for this object to be carried out, a certain moral and spiritual assistance is required. The University has an office to perform: its essence, teaching universal knowledge; the Church “steadies it in the performance of that office” (3). A University is a vessel with a long and arduous sea to cross: the cultivation of a “culture of the intellect” (7). The Church–the barque of St. Peter–offers much necessary guidance, security, and ballast for that voyage.

Newman recognizes that some may not readily see the necessity of the Church in the intellectual enterprise of a University. However, in our own day, it is readily apparent that the rapid progress of technologies and sciences, often based in university research centers, requires much ethical and moral guidance for application. Artificial intelligence, human reproduction, and genetics are all fields requiring serious examination from a higher perspective of philosophy, moral theology, and absolute truth. Newman engages in a slightly humorous imagined dialogue with those who might object that this means the Holy See has a vested and direct interest in “secular knowledge as such,” as if “the Vicar of Christ [were] bound by office or by vow to be the preacher of the theory of gravitation, or a martyr for electro-magnetism” (4). Rather, Newman keeps the focus of the Church’s assistance on two things. First, the Church is interested in “Revealed Truth.” Revelation offers a necessary counterpart to the University, which explores truth through Reason. While Reason is a God-given aspect of human nature (see Romans 1), Scripture also attests that fallen man is wrapped in sin and ignorance, and is thus in need of truths that are revealed. Newman says that the Church rejoices in “philosophical systems of intellectual education,” because Truth is really the ally and profession of the Church, and “Knowledge and Reason are sure ministers to Faith” (4). There is no inherent contradiction between faith and the sciences, the Church and the University; and, the Church, in assisting the University, does not dogmatically insist on a limited or narrowed scope of knowledge. Rather, the Church illuminates the full extent and possibility of that knowledge in a joyful proposal of Truth.

Even so, Newman thinks the Church is not invested in assisting the University for the sake of pursuing Truth as such, but in so far as acquiring knowledge results in the common formation of the Church’s “own children” (4). In his own time Newman was actually advancing the case for the establishment of a Catholic University in Ireland, and he clarifies that the Irish Hierarchy’s involvement in this project had the object of benefiting its members with “exercise and growth in certain habits, moral and intellectual” (4). The true end of quality education, of a real University, is well-formed human persons–not test scores, not research grants, not accolades, although these are good things in their own measure. Human persons, themselves, alone retain the potential to be salt and light in the world, blessing the Church and society with their robust formation. The Church helps remind the University that her prime aim is not to groom future potential workers for careers, but to cultivate souls with intellectual and moral decisions to make bearing eternal weight. Therefore, the Church’s involvement, whose prime interest is the salvation and sanctification of souls, is of paramount importance.

The Church, summarized in the See of St. Peter, has a deep and abiding pastoral concern for University pupils “with a view to their spiritual welfare and their religious influence and usefulness, with the object of training them to fill their respective posts in life better, and of making them more intelligent, capable, active members of society” (4-5). The Church sees to the full flourishing of University students, a flourishing that includes intellect, fulfillment of duty, and participation in society. The University can achieve much for mankind, but without the grace, without the gift, of the Church’s guidance, it will run the risk of becoming a new Tower of Babel: asserting its progress, technologies, and words to “make a name” for itself over and against God, ending in confusion and destruction (Genesis 11:4). The Church, by her teaching of the Scriptures and Tradition, and by her offering of sacramental life and guidance, is the body of Christ which, with Christ, makes up the totus Christus, the total Christ, and bestows on mankind the grace of truly directing all his efforts to God (Catechism of the Catholic Church 795).

The Church offers the student more than what studies alone can provide: the grace that cannot be acquired with books. This includes a pupil’s intellectual, moral, and spiritual cultivation in the fullness of truth and charity, Revelation and Reason. Have we truly considered the social and personal transformation that would take place if these truths were fully lived out in our schools?