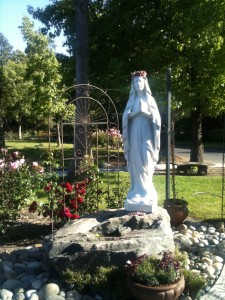 Blessed John Henry Newman tells us that the title Gate of Heaven is given to Mary because “it was through her that our Lord passed from heaven to earth.” The title alludes to a prophesy of Mary by Ezechiel: “the gate shall be closed it shall not be opened, and no man shall pass through it.” Six or so decades after Newman wrote this, the Virgin Mary, Gate of Heaven, appeared on May 13 in Fatima to open our eyes and ears to Heaven.

Newman urges us to imitate the example of the Virgin Mary’s response to the Angel Gabriel; like her “we must be obedient, and pure in our minds.”

Holy Mary, Gate of Heaven, obtain for us the conversion of souls and peace in our world.

May 13
Mary is the Janua Cœli,” the Gate of Heaven

MARY is called the Gate of Heaven, because it was through her that our Lord passed from heaven to earth. The Prophet Ezechiel, prophesying of Mary, says, “the gate shall be closed, it shall not be opened, and no man shall pass through it, since the Lord God of Israel has entered through it—and it shall be closed for the Prince, the Prince Himself shall sit in it.”

Now this is fulfilled, not only in our Lord having taken flesh from her, and being her Son, but, moreover, in that she had a place in the economy of Redemption; it is fulfilled in her spirit and will, as well as in her body. Eve had a part in the fall of man, though it was Adam who was our representative, and whose sin made us sinners. It was Eve who began, and who tempted Adam. Scripture says: “The woman saw that the tree was good to eat, and fair to the eyes, and delightful to behold; and she took of the fruit thereof, and did eat, and gave to her husband, and he did eat.” It was fitting then in God’s mercy that, as the woman began the destruction of the world, so woman should also begin its recovery, and that, as Eve opened the way for the fatal deed of the first Adam, so Mary should open the way for the great achievement of the second Adam, even our Lord Jesus Christ, who came to save the world by dying on the cross for it. Hence Mary is called by the holy Fathers a second and a better Eve, as having taken that first step in the salvation of mankind which Eve took in its ruin.

How, and when, did Mary take part, and the initial part, in the world’s restoration? It was when the Angel Gabriel came to her to announce to her the great dignity which was to be her portion. St. Paul bids us “present our bodies to God as a reasonable service.” We must not only pray with our lips, and fast, and do outward penance, and be chaste in our bodies; but we must be obedient, and pure in our minds. And so, as regards the Blessed Virgin, it was God’s will that she should undertake willingly and with full understanding to be the Mother of our Lord, and not to be a mere passive instrument whose maternity would have no merit and no reward. The higher our gifts, the heavier our duties. It was no light lot to be so intimately near to the Redeemer of men, as she experienced afterwards when she suffered with him. Therefore, weighing well the Angel’s words before giving her answer to them—first she asked whether so great an office would be a forfeiture of that Virginity which she had vowed. When the Angel told her no, then, with the full consent of a full heart, full of God’s love to her and her own lowliness, she said, “Behold the handmaid of the Lord; be it done unto me according to thy word.” It was by this consent that she became the Gate of Heaven.