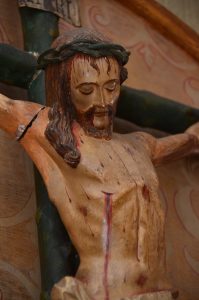 In a mere 76 words which make up the poem, “The Sign of the Cross,” Blessed John Henry Newman illustrates the nature of poetry: which can say so much, in just a few words. In this poem we are reminded of the power which is contained in that simple and frequently practiced act of making the Sign of the Cross, and what can be accomplished with this common prayer. We are then introduced to a recurring theme in Newman’s sermons, poems, and  letters:  the “invisible world,” that world which we profess in the Nicene Creed,  “I believe in all things visible and invisible.”

The first stanza of this short poem is fairly straightforward.  Note in the third line that four stressed syllables in a row (two spondees) serve to emphasize the words being spoken, illustrating Newman’s proficiency with meter,  and, again, in the fifth line another spondee will also emphasize these words. When  stressed syllables are used, they are like strong beats in a song.

WHENE’ER across this sinful flesh of mine

All good thoughts stir within me, and renew

Till there springs up a courage high and true

To suffer and to do.

Newman writes that after the “Holy Sign” is traced over the “sinful” body, this powerful sacramental causes the “slumbering” strength – that of the Holy Spirit’s inspiration – to “spring up” within the soul, “all good thoughts,” which brings with it courage to the person having signed himself “to suffer and to do.” This last line makes more sense if it’s understood that the word “suffer” here means “allow” – an older usage of the word, which is more familiar in Christ’s exhortation to “suffer the little children to come unto me,” that is, “allow the little children…” Therefore, the last line in this stanza means that the divine courage brought forth by the Sign of the Cross gives the person the strength to “allow” the courage to embolden him to act, or “to do.”

And who shall say, but hateful spirits around,

For their brief hour unbound,

Shudder to see, and wail their overthrow?

In these three lines, we meet with the reality of satan and his demons’ fear of the Sign of the Cross, for it was by the cross satan was conquered, and for this reason, the sign is used in exorcisms where it is efficacious in “overthrowing” him and his evil spirits who are from the invisible world. We are told in Eph. 6.12: “For our wrestling is not against flesh and blood; but against principalities and powers, against the rulers of the world of this darkness . . . . ” And these powers of darkness fear the Sign of the Cross!

In the final three lines we are reminded of something remarkable, of the effects of prayer! (note the stressed syllables).

While on far heathen ground

Some lonely Saint hails the fresh odor, though

Its source he cannot know.

In these lines is found the conviction which is at the heart of Christian prayer: that through the indwelling presence of God, a person of faith, rightly disposed and praying,  is potentially in touch with the whole world, visible and invisible. And by making oneself available in the humble obedience of prayer, a channel is opened for God’s grace to flow to any other in need, whether known or not. Prayers, which rise like incense to God, are in Revelation called the odor of saints (5:8). And then there are the other spirits: the angels who minister to us, the counterparts of the demons.  It is of this reality of the “invisible” that Blessed Newman often spoke and wrote.

(For instance in a sermon titled “The Invisible World” ( PPS 13 of Volume 4) he said:

And so in these 76 words of Newman’s poem, we are given an important lesson in the efficacy of Christian prayer: for overthrowing satan, for causing us to act in accordance with God’s will, and for aiding the many souls who need our prayer! When we make the Sign of the Cross throughout the day, we should pause and think of the angels who bring us before God in worship.