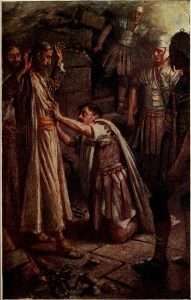 “What must I do to be saved?” may be the most important question we ever ask.  This question the simple Philippian jailer asked Paul and Silas.  Cardinal John Henry Newman was one of the great teachers of the Church, but he was not too lofty to ask it himself.  He begins his homily “Faith, the Title for Justification” with a similarly simple, but more specific, question: we know we need faith to be saved, but is faith all we need?  In his words, “If all that is necessary for acceptance with God be faith in Christ, how is Church Communion, how are Sacraments, necessary?”

If we read certain verses plainly, it certainly seems like only faith is necessary.  St. Peter says to Cornelius, “Believe on the Lord Jesus and you shall be saved,” and St. Paul writes in his epistle to the Romans, “if you confess with your mouth that Jesus is Lord and believe in your heart that God raised him from the dead, you will be saved.”  Newman explains that if faith seems to stand alone in these passages, there are several other verses where Church communion appears to stand alone, such as “If he neglect to hear the Church, let him be unto thee as a heathen man and a publican,” and “Except a man be born of water and of the Spirit, he cannot enter into the kingdom of God.”  The plain reading of Scripture isn’t so plain after all, and it would be as easy to ignore those verses that seem to honor faith above all else as it would be to ignore those that seem to honor the sacraments of the Church above all else.

Some people are tempted to mash the two together, or leave them to sit side by side without trying to join them naturally.  Newman says if we take both as seriously as Scripture commands us to do, they go hand in hand: “…if so, both, both faith and Church communion, are necessary, and that one will not save without the other; that our duty is to come to Christ in faith, through the Church,—and if we do this, we shall observe the rule given us both in the one set of texts, and in the other…”

Newman does not leave his listener to think about this abstractly, but provides a worldly example.  If a charitable person decides to provide food and shelter for the poor, would he be required to give money directly to a man on the street?  Would he be wrong to use his funds to support a homeless shelter and to tell the man on the street where to go to find the food and shelter he offers?  This is reasonable, and so Newman concludes, “As then a charitable person might say, ‘Ask, and ye shall have,’ and yet might not mean to excuse those who asked from the necessity of going to some place, and at some hour, when and where he dispensed his charity; so in like manner Christ may say by Himself or His Apostles, ‘Ask, and ye shall receive, ‘Believe, and ye shall be saved,’ and yet may mean to enjoin upon us certain rules, and to appoint a certain treasure-house, for our gaining that gift to which our asking and our faith are sufficient to entitle us.”  In other words, our faith gives us the means to receive God’s gift of salvation, but we must go to the Church to possess it.

As clear as he explains it, Newman is aware that some will find his reasoning unfair and unjust, as if he is twisting these scriptures to avoid their simple meaning.  Would it be right, he says, “…if a rich man promised an alms to his poor neighbor,” but when the poor man came, the rich man said, “I shall exact one condition, which I did not then mention, but which I meant nevertheless, and which is not inconsistent in set set terms with what I said…that you should walk some five hundred miles for my bounty, to some place where I have stored it…?”  This would be unjust and cruel, Newman says.  In the same way, some argue that “…faith is so prominently spoken of in certain passages of Scripture, as the means of gaining the benefits of Christ’s death, that it must be meant to be the only means; the silence observed in such passages concerning other means being equivalent to a denial of any other.”

Is this true?  In Part 2 of this series, Newman will answer this last objection.  Meanwhile we must wrestle with these basic questions of faith: do we think that faith is enough for salvation?  And furthermore, do we think we can exercise faith on our own and in our own terms?