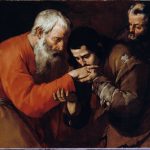 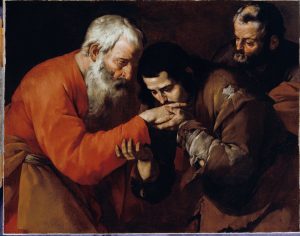 When prodigal children book passage for a far country, the last thing they want is a reminder about the likeliness of a U-turn. No ticket kiosk offering roundtrip fare will likely greet them at the border, and that is just as well. When worldly expectations are great and hopes high, the runaway can’t get into the mix of the world fast enough.

Often unnoticed, if not ignored, is the long procession of disillusioned and broken people on the return journey. Ironically, the world is often the cause of its own depopulation. Yet in the providence of Him who numbers the hairs on our head, there is no irony. The bitterness that inevitably follows worldly indulgence is a symptom of the deeper sickness that Jesus came to heal. The deceptive goods themselves that people run after can serve as God’s unsuspected means of returning them to Himself.

The lost are found in this way, Newman explains, “by finding disappointment and suffering from that which they had hoped would bring them good.”[1]

[T]hey learn to love God and prize heaven, not by baptismal grace, but by trial of the world; they seek the world, and they are driven by the world back again to God. The world is blessed to them, in God’s good providence, as an instrument of His grace transmuted from evil to good, as if a second sacrament, doing over again what was done in infancy, and then undone.

It might take something like the riches-to-rags experience of the prodigal son to bring some straying souls back to God. That the famous wanderer of the parable only came to his senses standing over a pigsty, coveting the slop the swine fed on, proves that whatever means God can use to reach our heart is fair game—whether the stench of garbage or the fragrance of a rose garden, all is mercy. Beauty or ugliness, joy or sorrow, can serve as the lever that detaches the heart from harmful ways and leads it back into the ways of salvation. Who hasn’t experienced this?

A soul’s turning point need not involve the obvious drama of the parable. If we assume that every unconverted person is feverish or grasping in his pursuit of worldly happiness, we take the extreme for the norm, and bypass more modest self-application. In reality, to be worldly is simply to believe that the (admittedly) unreliable happiness this world offers is the only happiness worth pursuing, and to act practically and regularly on that belief. No attempt at transcendence is seriously embarked on. Happiness comes from the world and remains in it without ever getting beyond it.

This creates a deeper problem in us that Newman identifies as an incurable loneliness. More than separating someone from their hometown, or even homeland, the world’s unfulfilled and unfulfillable promises of happiness end up separating a man not only from God but also from the world itself. The world is self-alienating.

For a season, buying into the world’s promises of happiness seems the best use of time, money, effort, and love. But eventually the repetition of pleasures and amusements emerges for what it always was: a surface distraction against inner loneliness, aggravated by the very diversions themselves.

Poet Matthew Arnold, a contemporary and admirer of Newman, wistfully noted this discrepancy in his famous poem “Dover Beach.” The world, seeming to provide for every need, cannot give what matters most:

…for the world, which seems

To lie before us like a land of dreams,

So various, so beautiful, so new,

Hath really neither joy, nor love, nor light,

Nor certitude, nor peace, nor help for pain…

Although Arnold’s poem leaves largely unidentified where these good things may be found, Newman’s sermon, “The Church, a Home for the Lonely,” points the way to a wholly unique, God-given “shelter, refuge, rest, home or sanctuary from the outward world,” locating our safe haven in

the Church of God, which is our true home of God’s providing, His own heavenly court, where He dwells with Saints and Angels, into which He introduces us by a new birth, and in which we forget the outward world and its many troubles.

Religious or not, world-weariness besets everyone born into the world. People naturally look around for solutions, or remedies, even if they remain stop-gap measures. Where people end up remains uncertain, yet land somewhere they must, because even though “they will not accept God’s remedy, yet they confess that a remedy is needed, and have recourse to what they think will prove such.”

Enter the gospel. God walks the earth in Christ, entering the lives of people surviving but deteriorating, in need of living water, living bread, the fresh air of the Spirit.

Here then Christ finds us, weary of that world in which we are obliged to live and act, whether as willing or unwilling slaves to it. He finds us needing and seeking a home, and making one, as we best may, by means of the creature, since it is all we can do.

Time and again Jesus seeks out those who have hit bottom or who are outwardly well off, but misguided. From the Samaritan woman to the rich young man, the Lord encounters people trying to make their home in this world as best they can but who need to be saved, not only from the world, but more importantly from themselves.

The gospels show Jesus treating people in just this way—as needing to be called, found, caught, brought back, and protected. He compares disciples to netted fish, birds protected in the branches of a large, shady tree, and to the sheep of a guarded fold. He couldn’t be clearer: Fallen people are prone to stray and need to be guided, protected, even rescued often—and then brought home.

If the prodigal son may be taken as the paradigm for all conversions, Newman sees the world itself as the unwitting cause of numerous returns from the distant country of dissipation. It ends up repelling those most prepared to embrace its values and standards. But the itinerary of famous gospel wanderers—a straying sheep, the prodigal son, the Samaritan woman—should not be misunderstood. Separation from the Lord is measured not primarily by traveling distance, but by an isolation of the heart.

And for this loneliness to set in, all that is needed is for love, hope, and faith to be misplaced. To force the world to be our lasting home, our land of dreams, and to pigeonhole ourselves as its tenants, is to misread entirely the message written into creation. The world is neither a paradise nor a prison, but the venue of our training in love and freedom. The disappointments encountered should make us recalculate our prospects for earthly happiness in a salutary way. They can set the heart free from dependence on the world, attachment to its attractions, so that we can enter into the company and communion of God and His saints.

These are inspiring thoughts for the solitary, the dejected, the harassed, the defamed, or the despised Christian; and they belong to him, if by act and deed he unites in that Communion which he professes. He joins the Church of God, not merely who speaks about it, or who defends it, or who contemplates it, but who loves it.[2]

And it is perhaps most especially in the absence of this love, or when confronted with its counterfeit, that the heart is stirred to desire its authentic and lasting expression in the Church of God, love’s genuine home.

[1] “The Church, a Home for the Lonely.” Parochial and Plain Sermons, vol. IV, Sermon 12. All quotations, unless otherwise noted, come from this sermon.