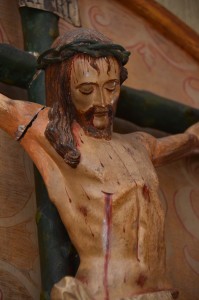 Blessed John Henry Newman wrote two sets of Stations of the Cross, a short one and a long one. They can be read at Newman Reader. Below are the first three from the short version. The Church invites us, especially during the Fridays of Lent, to meditate Our Lord’s Passion uniting ourselves to his sufferings with our own.

THE Holy, Just, and True was judged by sinners, and put to death. Yet, while they judged, they were compelled to acquit Him. Judas, who betrayed Him, said, “I have sinned in that I have betrayed the innocent blood.” Pilate, who sentenced Him, said, “I am innocent of the blood of this just person,” and threw the guilt upon the Jews. The Centurion who saw Him crucified said, “Indeed this was a just man.” Thus ever, O Lord, Thou art justified in Thy words, and dost overcome when Thou art judged. And so, much more, at the last day “They shall look on Him whom they pierced”; and He who was condemned in weakness shall judge the world in power, and even those who are condemned will confess their judgment is just.

JESUS supports the whole world by His divine power, for He is God; but the weight was less heavy than was the Cross which our sins hewed out for Him. Our sins cost Him this humiliation. He had to take on Him our nature, and to appear among us as a man, and to offer up for us a great sacrifice. He had to pass a life in penance, and to endure His passion and death at the end of it. O Lord God Almighty, who dost bear the weight of the whole world without weariness, who bore the weight of all our sins, though they wearied Thee, as Thou art the Preserver of our bodies by Thy Providence, so be Thou the Saviour of our souls by Thy precious blood.

SATAN fell from heaven in the beginning; by the just sentence of his Creator he fell, against whom he had rebelled. And when he had succeeded in gaining man to join him in his rebellion, and his Maker came to save him, then his brief hour of triumph came, and he made the most of it. When the Holiest had taken flesh, and was in his power, then in his revenge and malice he determined, as he himself had been struck down by the Almighty arm, to strike in turn a heavy blow at Him who struck him. Therefore it was that Jesus fell down so suddenly. O dear Lord, by this Thy first fall raise us all out of sin, who have so miserably fallen under its power.