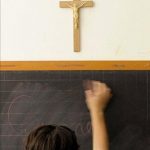 Peter Jesserer Smith, writing for the National Catholic Register, reports that 100 out of 195 American dioceses have adopted the Common Core National standards for K-12 education in their Catholic schools. Debate over this most recent educationalist fad is heated, the division stark, and in essence revolves around a simple question: is the Catholic heritage in itself sufficient for educating our children in the modern world?

The answer to this question often proceeds in typically modern fashion, by looking at the current society and planning education backwards in light of that “real world” that our children need to be prepared for. Not only is this method of answering the question not Catholic, as opponents of Common Core would argue, but it is also not actually realistic, humane, practical, or truly formative.

St. John Henry Newman would have us answer the question with a different method, one that is centered on the “real world” of the child, and his or her capacities as a human being made in the image and likeness of God. To reduce the “real world” to a socially engineered educational program based on the current make-up of society and politics ignores this deeper “real world” of children and humanity. It also fails by its own standards, since it is not in fact based in true reality. Ever since John Dewey championed this kind of educational thinking in the early 20th century, his system has been doomed to a fatal flaw: the current “real world” of society and politics is inherently unstable, constantly changing, and therefore a curriculum based on it will likewise become unstable, prey to fads and fashions, always shifting and never centered on anything of lasting value, and ultimately damaging to the young minds it claims to serve.

Newman’s starting point is not “what is of practical value in today’s world,” but “what is true,” “what is good for the child’s mind, his or her human nature,” and “how can the child’s mind be opened to the beauty of God’s creation?”

In pursuing these questions, Newman lays out very important first principles in the Idea of a University, to which the reader is heartily commended. Here are some of his most important points relevant to this discussion of younger children:

This might seem like a tall order for our day. The solution is challenging, but in philosophical terms, simple: cultivate well-formed students with sharp minds, through the personal influence of well-formed instructors. Perhaps the Common Core or other systems for government standards seem attractive because we lack good examples of excellent instructors and engaged students, and out of a sense of hopelessness think we are better off having government machinery do the work for us. Big Government standards appear comprehensive on paper and feel easier, as if a lot of hard-work has already been done.

The real substance of education is much more challenging, and much better: a highly knowledgeable instructor, with an attentive eye, warm spirit and personal presence, holds a student accountable for attaining real knowledge and understanding of the subject matter. This personal cultivation of a “discipline of mind” is not only our Catholic heritage, but is also in tune with human nature, the family, and is far more practical—it is the only education that really works.