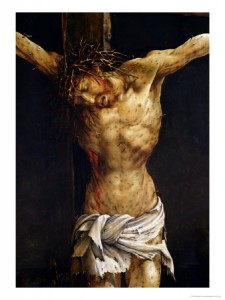 We return once more to Newman’s Sermon “Christ, the Son of God made Man” which explains the meaning of the Scripture passage: “Christ being come, an High Priest of good things to come, by a greater and more perfect tabernacle not made with hands, that is to say, not of this building.” Heb. ix. 11. We can ask: In what sense was Christ a perfect tabernacle? And, Why is his death a perfect atonement for sin?

Newman expounds on the Church’s doctrine. Christ who suffered was a new and perfect tabernacle “a greater and more perfect tabernacle,” that is, greater than any thing earthly. His pure and sinless flesh was miraculously formed by the Holy Spirit of the substance of the Blessed Virgin Mary.

We speak of Him as Man because St. Paul speaks of the one Mediator as “the man Christ Jesus.” Still, Newman explains, the Christ was not exactly man as we are: “He was man because He had our human nature wholly and perfectly, but His Person is not human like ours, but divine. He who was from eternity, continued one and the same, but with an addition. His incarnation was a “taking of the manhood into God.”

He was God, acting not only as God, but now through the flesh also, when He would. His prayer was that of the Eternal Son of God but “through the feelings and thoughts of human nature.” His actions were divine actions exerted through the flesh, his human nature acting as an instrument. And his suffering issued forth God’s power: “When He poured out His precious blood upon the Cross, it was not a man’s blood, though it belonged to His manhood, but blood full of power and virtue, instinct with life and grace, as issuing most mysteriously from Him who was the Creator of the world.”

He thus became through his human nature an Atoning Sacrifice and our High Priest through the perfect tabernacle which he assumed. Newman clarifies that although we call Christ a tabernacle and an instrument we cannot suppose that He was a tabernacle in the sense of a place in which man dwells, going in and out, or that he was an instrument which can be taken up and put down.

“Far from it; though His Divine Nature was sovereign and supreme when He became incarnate, yet the manhood which He assumed was not kept at a distance from Him (if I may so speak) as a mere instrument, or put on as a mere garment, or entered as a mere tabernacle, but it was really taken into the closest and most ineffable union with Him.” His humanity cannot be separated from his divinity as any of Christ’s attributes such as justice and mercy can be separated from Him. These attributes belong to His divinity; they do not subsist of themselves, and neither does his human nature.

“Thus all that He did and said on earth was but the immediate deed and word of God the Son acting by means of His human tabernacle.” As we profess in the Athanasian Creed divine nature is not converted into human nature. The human nature is taken into the Person of Christ. Neither is there a confusion of substances, divine and human, to form a new nature. Christ’s unity consists in the unity of the One Divine Person, not in the unity of two natures.

These are high mysteries of faith, which we must approach with reverence and awe. When we meditate on Christ’s Passion we should consider that this atoning act was the act of the Son of God through His human nature. He was the perfect tabernacle and atoning sacrifice. Furthermore it will lead us to greater gratitude for his immense love and desire to correspond to his love in all our thoughts and actions.