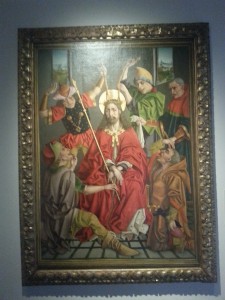 In the season of Lent we prepare for the celebration of the mystery of Christ’s Passion and Death and Resurrection. The events of Christ’s Baptism and Temptations in the desert, and of his Transfiguration are a preparation for Easter. Like the disciples we need to come to know Christ who gives his life for us. Cardinal Newman begins a sermon titled “Christ, the Son of God made Man” by citing the Scripture texts that affirm Christ’s divinity. After this he explains that this Christ who is Divine is also Son of God, and that his sonship is not only in regards to his human nature. Christ is eternally the Son; otherwise he would have two personalities, a Divine and a human. Christ is one Person, and He is the Son of God. “In heaven He was this, and did this, as God; and on earth He was this, and did this, in that manhood which He assumed, but whether in heaven, or on earth, still as the Son.”

This important truth about the unity of the Divine and human natures in the one person of Christ also sheds light on the mystery of Redemption and the extent of God’s mercy with man. The One who will suffer the terrible passion is none less than the “One All-gracious Son of God.”

Newman explains: “Again, we read in Scripture of His being sent by the Father, addressing the Father, interceding to Him for His disciples, and declaring to them that His Father is greater than He; in what sense says and does He all this? Some will be apt to say that He speaks only in His human nature; words which are perplexing to the mind that tries really to contemplate Him as Scripture describes Him, as if He were speaking only under a representation, and not in His Person. No; it is truer to say that He, that One All-gracious Son of God, who had been with the Father from the beginning, equal in all divine perfections and one in substance, but subordinate as being the Son,—as He had ever been His Word, and Wisdom, and Counsel, and Will, and Power in Heaven,—so after His incarnation, and upon the earth, still spoke and acted after, yet with, the Father as before, though in a new nature, which He had put on, and in humiliation.”

With this consideration of the Second Person of the Blessed Trinity Newman comments on the following text of the Letter to the Hebrews which serves as the main point of his sermon:

“Christ being come, an High Priest of good things to come, by a greater and more perfect tabernacle not made with hands, that is to say, not of this building.” Heb. ix. 11.

Newman writes: “This was the new and perfect tabernacle into which He entered; entered, but not to be confined, not to be circumscribed by it. The Most High dwelleth not in temples made with hands; though His own hands “made it and fashioned it,” still He did not cease to be what He was, because He became man, but was still the Infinite God, manifested in, not altered by the flesh. He took upon Him our nature, as an instrument of His purposes, not as an agent in the work.”

As the Athanasian Creed professes Jesus is “perfect God, and he is perfect man, with a rational soul and human flesh,” but he is not only a man like we are; not a man in exactly the same sense as we are.

“He was man because He had our human nature wholly and perfectly, but His Person is not human like ours, but divine. He who was from eternity, continued one and the same, but with an addition. His incarnation was a “taking of the manhood into God.””

Newman draws the following conclusions: when Christ prayed it was not the prayer of a supplicating man; it was the prayer of the Eternal Son of God. When He spat on dust and anointed a blind man He “exerted the virtue of his Divine Essence.” When He shed his blood upon the Cross although the blood flowed from his manhood it was “blood full of power and virtue, instinct with life and grace, as issuing most mysteriously from Him who was the Creator of the world.”

These considerations on the mystery of Christ, the Son of God, can lead us to a deeper meditation of God’s mercy for each one and for mankind.