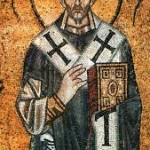 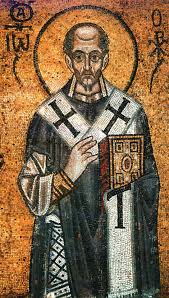 What was the secret of St. John Chrysostom’s success as a leader and reformer?

The spiritual leaders of a city or society inspire the moral lives of their citizens. They understand well people’s needs and hopes; they connect with them at a deeper level than others, leading them to God. This is what St. John Chrysostom (349-407) did as priest and later bishop. What were his means for doing so?

He was a renowned preacher drawing large crowds to hear his homilies, in which he explained the Scriptures and taught the faith in a straightforward manner, taking examples from everyday life which contrasted with the allegorical interpretation of the Scriptures common in Alexandria. His homilies on many different books of the Bible are still widely read.

Newman, however, comments: “We shall be very wrong if we suppose that fine expressions, or rounded periods, or figures of speech, were the credentials by which he claimed to be the first doctor of the East. His oratorical power was but the instrument, by which he readily, gracefully, adequately expressed,—expressed without effort and with felicity,—the keen feelings, the living ideas, the earnest practical lessons which he had to communicate to his hearers. He spoke, because his heart, his head, were brimful of things to speak about.” The power lay in his person and message: ” His unrivalled charm, as that of every really eloquent man, lies in his singleness of purpose, his fixed grasp of his aim, his noble earnestness.”

As Archbishop of Constantinople, Chrysostom composed beautiful additions to the Divine Liturgy (the name given to the Holy Mass by Eastern Catholics) that continues in use today.

Both of these means, his preaching and the liturgy, were very important, yet Newman wished to highlight the role of friendship played in John Chrysostom’s life and work. Chrysostom had a great capacity and need for friendship. He was “a bright, cheerful, gentle soul; a sensitive heart, a temperament open to emotion and impulse; and all this elevated, refined, transformed by the touch of heaven,—such was St. John Chrysostom; winning followers, riveting affections, by his sweetness, frankness, and neglect of self.”

It was his duty to meet with many people: “He mixed freely with all ranks of men; and he made friends, affectionate friends, of young and old, men and women, rich and poor, by condescending to all of every degree.” He had many friends who loved him dearly, as well as many enemies, because his moral teaching was demanding. Among his friends were men and women who today are honored as saints. Newman contrasts St. John’s personality with that of two friends, also bishops and saints, Basil and Gregory Nazianzus.

His departure from Constantinople was a sad event reminiscent of St. Paul’s farewell at Ephesus. The people would not see his face or hear his voice again. In the baptistery of the cathedral he told some pious women: “I have finished my course; it may be, you will not see my face again. But one thing I ask of you, continue your services to the church; and, if there be one put into my place against his will, and without his seeking, and with the consent of all, him obey as if he were John: for a church cannot be without a Bishop: so shall ye find mercy. And remember me in your prayers.”

Travel to the place of exile on the Black Sea took him through cities that held significance for him because of their association with events and peoples. The journey began at Nicaea, the place where the council had condemned Arianism, and took him through Caesarea, the See of Basil; and through Nyssa, the home of his brother St. Gregory; and near Nazianzus, the home of the other St. Gregory.

During his travels Chrysostom wrote letters to his friends. Newman indicates how St. John thought of their health and concerns more than of himself. He wrote, for example, to Olympias, a young widow named from a wealthy family, asking her to write to him with news of her health. He tells her not to worry about his health and care. Olympias became a deaconess[1] and is honored as a saint.

To another friend, Constantius, a priest from Antioch, he gave advice about the work of evangelization. God’s work is what fills his mind, and he wishes to support his friend from his place of exile. In one of his letters to him we read: “Write me word how many churches are built every year, and what holy men have passed into Phœnicia, and what progress they have made.”

Into his sketch of this great fourth-century Archbishop of Constantinople, Blessed Cardinal Newman insinuates the great value of friendship in life, and in any work of spiritual and moral renewal. This too was the secret to John Henry Newman’s great success in 19th century England. He had numerous friends and made it a point to pray for them and to write them often; he shared their joys and sorrows, and he asked for their help in many different ways and inspired them to holiness.

Friendship and good example continue to be paramount in shaping the society in which we live. When asking the question: “What can Christians do in the face of the crisis of faith and morals of contemporary society?” one sure answer will be to consider the importance that those great spiritual leaders of the past have given to friendship. As long as genuine and loyal friendship exists Christians will continue to be salt and leaven for the world. St. Josemaría Escrivá would later write: “These world crises are crises of saints.”[2] Society needs new saints who through their friendship will lead countless other men and women to live as God’s children.

[1] Deaconesses were women who served in the early Church especially helping in the liturgy with matters regarding other women such as the baptism of adult women, anointing of catechumens or instruction.