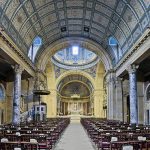 The smallest of deeds, allied with the good and offered to God in humble prayer, can, in time, be fully revealed as in fact evidence of heroic virtue. Who would have known that St. John Henry Newman’s humble deference to God’s will—to become Catholic, to found an Oratory in Birmingham, to disciple Oratorians for years and years—would give rise to an orphanage; and to a later Oratorian, Fr. Francis Xavier, who would adopt, disciple, and raise the great Catholic literary artist of the 20th century, J.R.R. Tolkien? Without Newman’s faithful obedience, there would perhaps be no Lord of the Rings.

In J.R.R. Tolkien’s famous The Lord of the Rings, the heroic ring-bearers Frodo and Sam are resting on the treacherous rock-stairs of Cirith Ungol, following their beastly guide Gollum into the evil realms of Mordor. Frodo has just witnessed the evil armies of Minas Morgul pouring forth to decimate the kingdoms of men and elves, and he loses nearly all hope. He fears he is too late in his mission to undo Sauron’s evil, and thinks that even if he succeeds, no one would ever know, and the good would already be defeated. On the stairs, Frodo and Sam reflect on what kind of story they are in, wondering if their story will turn out happy or tragic. They are given a new kind of boldness by realizing that in the greatest stories, the heroes never know how things would turn out, and “we wouldn’t want them to.” Otherwise it would not be a great story. These greatest of heroes in the best legends become heroes precisely because they make a single decision, or a series of small definite decisions, to persevere in the good. What at the time may seem small, inconsequential, and even ineffective, becomes, in the broader story, part of the portrait of great deeds and heroic adherence to the good. Sam and Frodo thus continue, one step at a time, to choose courage even while marching into blackness and death.

St. John Henry Newman’s sermon “Contest Between Good and Evil in the Church” is a timely reminder of this truth as we face evil, lies, and immorality in our own Church. Newman reminds us that, ever since its beginning, truth and lies, good and evil, exist alongside one another within the Church. And, he argues, this is a fact relevant to every member of the Church, in that each is called to resist the evil in his or her own measure. No one is above, aloof from, or exempt from, the contest between good and evil, but each must choose a side and actively maintain it.

The Church has faced evil within, not just without, since the Apostolic Age. From Judas’ treachery to St. Peter’s failings and St. Thomas’ unbelief, there has always been “United in one and the same body… faith and unbelief, humbleness and pride, love and selfishness.” It is perhaps a temptation to forget that we are still here in the Church Militant, not yet the Church Triumphant. We still have time to err, and those who err still have time to repent. The Church has “unholy members,” whose unholiness must not be left unaddressed. Newman sees this mixed state of the Church’s holiness in Matthew 13:47-48, which serves as this sermon’s epigraph: “The kingdom of heaven is like unto a net, that was cast into the sea, and gathered of every kind: which, when it was full, they drew to shore, and sat down, and gathered the good into vessels, but cast the bad away.”

If evil and falsehood are mixed within the very body of the Church here on earth, then our duty as believers in that body is to resist, oppose, and root it out. But rather than opposing evil and seeking its defeat within the Church, Newman worries that some invent an “Invisible Church … peopled by Saints only,” scorning the “visible Church” as “nothing but a mere part of this world, an establishment, sect, or party.” One would thus be inadvertently inventing one’s own Church, refusing the possibility of a Church in which unfavorable persons were present. On the other hand, Newman worries about the opposite excess, a flattening of the “Divine ordinance” of the Church into a low standard of “faith and holiness,” thinking the “communion of saints” nothing but a name, effectively “destroying all notions” of faith and morals by assuming “all Christians to be about alike.” This extreme would have the effect of glossing over all unholiness, and no longer calling sinners to the high standards our Lord holds for us.

Newman’s point in this sermon is not to weigh in on any definite issue, although he thinks that all of us in this life are, on a regular basis, faced with issues that have two sides between which one must choose. However, his point is that the above two excesses both diminish the responsibility of the individual believer to actually be an agent in the contest between truth and falsehood. We all must make decisions to follow the good and oppose the evil. Sadly our secular world, and perhaps sheer cowardice, seem to have trained us to approach evil and unholiness in ways that are entirely out of keeping with the Gospel: to try to appease what is unholy by tolerating it in small amounts, or to ignore what is unholy hoping that it will dissolve of its own accord, or to explicitly make our peace with what is unholy and commend it in order to curry favor or lobby for power.

None of this is in accord with Our Lord’s teachings. In fact, Newman clarifies that if we do anything merely because it is our own choice, developed on our own standards of what we think is within our rights, or what might be most effective, alluring, or consequential, and not because our conscience cues us into God’s will, we are in fact “following the devil’s pattern.”

Newman’s thoughts here are reminiscent of St. Therese of Lisieux’s “Little Way”: all of us are called to the heroism of every-day holiness, of taking every thought captive for Christ, of making every act of self-denial and sacrifice a total oblation of love and service to God.