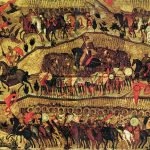 In his sermon “The Contest Between Truth and Falsehood in the Church,” St. John Henry Newman portrays the individual believer, no matter how insignificant in the eyes of the world, as instrumental in the fight against evil, evil both in the world and within the precincts of the Church. If it is true that the contest between good and evil occurs within the Church, not just between the Church and the world; and if it is true that the smallest of deeds hold weight in this battle; and if it is true that one cannot be neutral in the fight, then St. John Henry Newman is right to hold a very high standard for every member of the Body of Christ: “there is a right and a wrong … it is not a matter of indifference which side a man takes … a man will be judged hereafter for the side he takes.” No member may be neutral in the battle. It is perhaps the slyest tactic of the Enemy to attempt to persuade us of the possibility of moral neutrality. The real site of the contest may often be our own apathetic hearts.

In all matters, no matter how seemingly trivial, every day, or small, we will each face tests of our fidelity, or “trials of our obedience,” to the truth of “God’s unerring judgment.” Newman’s illustrations of this are too beautiful to not quote in full:

How is our devotion to Christ shown? Ordinarily, not in great matters, not in giving up house and lands for His sake, but in making little sacrifices which the world would ridicule, if it knew of them; in abridging ourselves of comforts for the sake of the poor, in sacrificing our private likings to religious objects, in going to Church at a personal inconvenience, in taking pleasure in the society of religious men, though not rich, or noble, or accomplished, or gifted, or entertaining; in matters, all of them of very little moment in themselves.

How is self-denial shown? Not in literally bearing Christ’s Cross, and living on locusts and wild honey, but in such light abstinences as come in our way, in some poor efforts at fasting and the like, in desiring to be poor rather than rich, solitary or lowly rather than well-connected, in living within our income, in avoiding display, in being suspicious of comforts and luxuries; all of which are too trifling for the person observing them to think about, yet have their use in proving and improving his heart.

How is Christian valour shown? Not in resisting unto blood, but in withstanding mistaken kindness, in enduring importunity, in not shrinking from surprising and hurting those we love, in undergoing little losses, inconveniences, censures, slights, rather than betray what we believe to be God’s Truth, be it ever so small a portion of it.

Newman also takes time to refute the idea that “religion has nothing to do with politics,” which would only be true if God did not “govern the world” or “rule in human affairs” and thus demand obedience of his servants. Religion has everything to do with everything in life; there is nothing about which God is simply indifferent, and therefore nothing about which we can be simply indifferent. In all things we must choose a side. We have an obligation to “raise the standard of faith and obedience” in ourselves and for others, and cannot merely tolerate those who take sides against the truth without warning them. It is true that some take part in this contest with a “mixture” of “right principles and defective temper, or of sincerity and partial ignorance,” and with varying levels of charity and peaceableness. But this does not diminish the fact of the contest itself, in which we all must take part. If life is a journey, then we must always choose a single path when we reach a fork in the road—to stop journeying simply to delay the choice, or to attempt to choose both ways, is to our own peril.

Newman is not giving advice. He is reminding us of a “solemn” truth: “That there is nothing indifferent in our conduct, no part of it without its duties, no room for trifling, lest we trifle with eternity.” It is dangerous for us to choose our own way and not discern God’s way. Whatever social or political “rights” we might have merely “impose duties on us in God’s sight.” We are each either a “vessel of mercy or a vessel of wrath fitted to destruction;” we cannot be both or neither. Without judging our brothers’ and sisters’ spiritual states, it is still our duty to find out what is right, to oppose what is wrong, and to “witness against others when we think them wrong,” showing them our seriousness through personal and caring manners, lest we merely tolerate their sin and “so become partakers of it.”

It is perhaps the great failing of our modern age to reject the idea of “sin.” We would do well to heed Shakespeare’s character Edgar, who says in King Lear, “The Prince of Darkness is a gentleman.” It is genteel, respectable, bourgeois, civilized, in the eyes of our world, to deny the existence of sin, deny moral agency in the battle against evil, to reject our dutiful obligation to oppose falsehood. But we do so at our peril, and neglecting to do so in even the most trivial ways brings us in league with the devil. Instead of sinners in need of redemption, man has remade himself in his own image as one who is at worst a mouth to feed—a liability—or at best a sophisticated animal with desires to be gratified at any cost—a despot. Alexis de Tocqueville thought that the danger of democracy was that it would make every citizen “more than kings and less than men,” dehumanized by their own individualist egos. Newman’s reminder is that we are all, in our own measure, called to be champions in a fight of good and evil: the fight, the good, and the evil are all real. To deny their reality is to deny the real dictates of conscience, our moral responsibility and agency, which would be to deny our very humanity, as well as to deny our divine, religious calling. We must live in the truth as children of the light, boldly making headway against evil and falsehood through our prayers, works of mercy, and holy deeds, always vigilant with the help of saints and angels, through Our Lord Jesus Christ, to truly be the Church Militant at spiritual war with the powers of darkness.