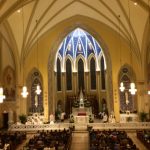 Christians often think of public prayer held in the Church as a duty. This is the frame of mind many frequently have in the Church. They consider Sunday Mass a tiresome obligation. In a sermon titled Daily Service St.John Henry Newman told his congregation that daily prayer in common is a privilege. At the end of the sermon he admits that because of man’s fallen condition the Gospel privilege comes at first with an obligation.

Newman gave this sermon in 1834 when he was introducing into his parish the practice of a daily service established by the Common Book of Prayer, the Anglican order of prayer from the time of the Protestant Reformation. The service, which corresponds to the Catholic office of readings or matins consisted of readings of the psalms alternating with readings from the Scriptures, called lessons, and some short periods of quiet prayer. A few years later, in 1837, he instituted a weekly communion service at his parish.

He begins the sermon citing Scripture passages from St. Paul and St. Peter that call Christians to continuous prayer.

Newman writes: “some of us in our secret hearts have at times been tempted to imagine; that is, we have been disposed to think that public worship at intervals of a week has in it something of natural fitness and reasonableness which continual weekday worship has not.” The Letter to the Hebrews, however, urges Christians “Not forsaking the assembling of ourselves together as the manner of some is, but exhorting one another; and so much the more, as ye see the Day approaching.”

It could well be said of our age, as Newman spoke of his: “the present age loves conversing and hearing about religion, and does not like silent thought, patient waiting, recurring prayers, severe exercises, that therefore we must obey it, and, dismissing rites and sacraments, convert the Gospel into a rational faith, so called, and a religion of the heart.”

In reply to this way of thinking Newman showed his listeners that the Scriptures teach us to pray continuously and that the Lord’s Prayer is a “social prayer” that sanctions a “daily united prayer.” Then he goes to his central point: family prayer is not only a fulfillment of Christian duty, it is a privilege that corresponds to Jesus’ words: “where two or three are gathered in my name I am there in their midst.”

In addition to celebrating the Holy Eucharist on the Lord’s day, Christians met on Wednesdays and Fridays for prolonged prayer and fasting, and in some places on Saturdays. Festivals of martyrs were observed, and often vigils were added the night preceding these and the Lord’s Day. With these and other examples, Newman indicated how highly the early Church valued the privilege of united prayer. “So far (it) must be clear to every candid person who considers the state of the case, that they found some sort of pleasure in prayer which we do not; that they took delight in an exercise, which—(I am afraid I must say, though it seems profane even to say it)—which we should consider painfully long and tedious.”

Newman noticed the laxity of Christians in his time. He realized the need for private and common prayer. (This was a basic tenet of the spiritual renewal sought by the Oxford Movement.) He told his congregation: “I have now said enough to let you into the reasons why I lately began Daily Service in this Church. I felt that we were very unlike the early Christians, if we went on without it; and that it was my business to give you an opportunity of observing it, else I was keeping a privilege from you.”

In the sermon, he replied to another objection: that few people would attend the daily service. He explained that the minister should draw men to God as Christ did. Those who gather represent the Church at prayer, and men and women who are not present at the church, can join themselves to this common prayer. Those engaged at work and other daily occupations, or those who are ill and cannot attend, can think at times of the readings and prayers, thus finding consolation in this.

For the multitudes of men, however, daily common prayer will seem excessive, unnatural, or a sort of “bondage.” St. John Henry Newman’s hope is that “ … these men, through His great mercy and the power of the Holy Ghost working in them, will at length find persevering prayer, praise, and intercession, neither a bondage nor a barrenness. But it is in the nature of things that Christ’s word must be a law while it is good tidings.”

There is an echo of Newman’s exhortation in the invitation in the documents of Vatican II for the renewal of the practice of the prayer of the liturgy of the hours, especially vespers, in parish churches. These and other meetings for common prayer are indeed a Christian duty, but foremost a privilege. They are also the Christian’s first response to the needs of a secularized world that without God gropes along in the dark.