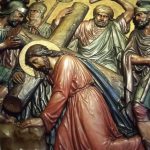 To truly live the Christian faith is not easy. It is marked, among many other things, by taking risks, by making what St. John Henry Newman calls a “venture.”  As Pope Emeritus Benedict XVI says, we are not made for comfort; we are made for greatness. To enter glory, we must bear the cross.

To really imagine this truth, take a moment to entertain a thought experiment that may sound odd at first: imagine that the Christian faith is proven untrue, that Christ was not raised from the dead, that heaven is not real, that there is no salvation for our sins. If this was the case, would your life change significantly, or only superficially? Would it undermine the very fabric of your life, what you have wagered everything on, or would everything pretty much stay the same, perhaps except going to church?

Answering this question honestly is important because it reveals the extent to which we actually have faith. St. John Henry Newman’s sermon, “The Ventures of Faith,” describes faith as a “venture,” a risk, a sacrifice, something we stake everything on without the complete certainty of success, something we are not complacent about because losing it would cost us everything. A good venture requires significant sacrifice, and its failure would make our “present condition” worse off. Newman uses trading as an analogy:

A trader, who has embarked some property in a speculation which fails, not only loses his prospect of gain, but somewhat of his own, which he ventured with the hope of the gain. This is the question, What have we ventured? I really fear, when we come to examine, it will be found that there is nothing we resolve, nothing we do, nothing we do not do, nothing we avoid, nothing we choose, nothing we give up, nothing we pursue, which we should not resolve, and do, and not do, and avoid, and choose, and give up, and pursue, if Christ had not died, and heaven were not promised us. I really fear that most men called Christians, whatever they may profess, whatever they may think they feel, whatever warmth and illumination and love they may claim as their own, yet would go on almost as they do, neither much better nor much worse, if they believed Christianity to be a fable.

Newman’s serious “fear” is that most Christians would answer “no” to our thought experiment. They have staked nothing on it, made no venture, made no sacrifice. But Christ, in stirring words to his Apostles, reminds us that we must cultivate holy ambition for a “high and unearthly spirit,” to make a bold bid for the things of heaven, to stake everything on our faith, to make great sacrifice with Christ that we may join Him in his great glory. If we wish to “earn the Crown,” we must embrace “the duty of bearing the Cross.”

The Apostles James and John were filled with such holy, “noble ambition” when they asked Christ to place them beside his Throne in glory, and claimed that they were able to drink the same cup Christ drank (Matthew 20:22). St. Peter likewise, filled with zeal, wishes to follow Christ always, even to death (John 13:36). But Christ admonishes all three Apostles to be sure to count the cost. As Newman puts it, they don’t yet realize that they are asking for a Cross on the way to a Crown, that they must embrace a “venture for eternal life without absolute certainty of success.” They will need to actively choose Christ in the midst of adversity, and possibly fail.

Our duty as Christians is to risk “upon Christ’s word what we have for what we have not” in a “noble and generous way,” not “rashly or lightly.” We must lean and wait and trust upon Christ to fulfill his promise in all things, knowing that He knows fully the path that we will remain largely ignorant of. If we had complete knowledge or certainty, faith would not be a venture; indeed, faith would not be faith. Even so, Newman thinks there are five clear signs by which we can know that we are making the venture, that we do have an active, non-complacent faith that is making progress in sacrifice:

All of these are not mere arbitrary standards, but flow out of the heart of a true disciple of Jesus Christ who endures sacrifice of earthly things for the sake of Heavenly reward (Matthew 19:29-30). They flow out of love, a true desire to obey God’s commandments. We are promised eternal life, which is not a mere quantity of an unending series of moments, but is a supernatural quality of life, a sharing in what St. Thomas Aquinas calls the “wholeness” of God in Christ, which requires of us much maturity, responsibility, and participation.

This Easter season is a perfect time to make new ventures, new bold experiments in the life of faith. Would our lives be any different without our faith? If not, we are perhaps in need of a reconversion, of ongoing reconversions, of reconciliation with the Holy Spirit who filled us at our Baptism and Confirmation, and longs to fill us again in the Confessional, where Christ told St. Faustina He is “hiding” behind the priest awaiting the return of his beloved children to forgive them, and in partaking of Christ’s true Body and true Blood in the Eucharist, where He hides beneath the appearance of bread and wine and longs to fill us with Himself.