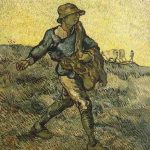 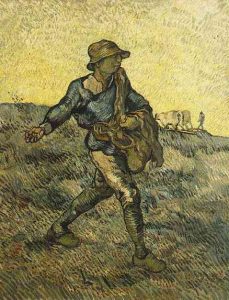 In the poem, “Faith against Sight,” Blessed Newman gives both a warning  and a reassurance. He teaches us that no matter what is happening in the world around us that may disturb our peace, we as Christians must always have the same response, and that’s to preach the truth of the Gospel. The poem begins with an epigram taken from the gospel of St. Luke: “As it was in the days of Lot, so shall it be also in the day of the Son of Man.”

These verses are usually taken to be in reference to the end times, when men will still be living their secular or even sinful lives, without a concern for how they are living. They little realize that the Lord is returning to judge the living and the dead. In the words of Ecclesiastes, there is nothing new under the sun. Men seem never to learn this lesson, even though sinful mankind was destroyed both in Sodom and Gomorrah and in the days of Noah.  The first stanza  points to this cycle of sin and destruction. But Newman will put this into the right perspective in the last verse.

THE world has cycles in its course, when all

That once has been, is acted o’er again:—

Not by some fated law, which need  appal

Our faith, or binds our deeds as with a chain;

But by men’s separate sins, which blended still

The same bad round  fulfil.

In this first stanza, Newman tells us that the cause of this cycle of sinfulness and destruction is not because of some blind fate, outside of men’s control (which would weaken our faith) or because of some sort of determinism, in which men are “bound” as with a chain, and therefore nothing that men can do will matter, but instead it is because of the recurring sin of humanity, which over and over, will bring the same results.

In the second stanza Newman reminds us of the story of Gallieo, whose theory of heliocentrism  was controversial during his lifetime, when most subscribed to an earth centered solar system.  Galileo met with opposition from astronomers (the soft clad nobles) who doubted heliocentrism because of the absence of certain observational phenomenon.  Newman writes:

Then fear ye not, though Gallio’s scorn ye see,

Trials and crimes: so learn ye well your parts.

In other words, just like Galileo was scorned though he was actually correct, so also must we, those of us with “true hearts” speak the truth without fear! Yes, the world may seem to be tumbling down all around us, but for those of us who know Whom we have believed, we need not fear destruction. Unlike the fig-tree, who was withered by Christ for not bearing fruit, we Christians will learn from His teachings, and believe.

This second stanza concludes with what is expected of us as Christians.

Once more to plough the earth it is decreed,

And scatter wide the seed.

We are called by Newman to scatter wide the seed of the truth of the gospel, to do our part as Christians, living in the world which just like from days of old, is still sinning and reveling and pretending there is no God. This is not our concern, nor should the evil around us shake our faith! We must simply be salt and light, and then ours too will be the reward.