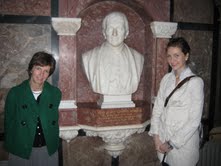 After noting that good professors make a university, Newman addressed the question of whether professors from other countries would be welcomed to the University in Ireland.

Such a friend enjoyed occasional visits, but nothing more, “To a life such as this, a man is more attached, the longer he lives; and he would be more and more happy in it too, were it not for the memento within him, that books and gardens do not make a man immortal; that, though they do not leave him, he at least must leave them.”

Newman recalled schoolboy years when he had been to this country home. Upon reaching the gate of the house he teased his friend about being an old pagan fit for one of Cicero’s dialogues. The man retorted that Newman was a pretty fellow busying himself writing about Athens in his University Gazette. He asked why Newman had gone to Ireland and how he thought he would succeed there.

The old friend insisted that Newman was out of place in Ireland. “You are an Englishman; your mind, your habits are English; you have hitherto been acting only upon Englishmen, with Englishmen; do you really anticipate that you will be able to walk into a new world, and to do any good service there, because you have done it here?”

Newman replied that during Middle Ages Ireland had sent wise and learned men to teach abroad. He was sure that now too it had men that could teach in this university but that they would not monopolize the teaching chairs of the new university.

The old man however opined that the Irish would not welcome foreign students: “Irishmen boasted, and justly, that in ancient times they went to Melrose, to Malmesbury, to Glastonbury, to East Anglia, to Oxford; that they established themselves in Paris, Ratisbon, Padua, Pavia, Naples, and other continental schools; but there was in fact no reciprocity now; Paris had not been simply for Frenchmen, nor Oxford simply for Englishmen, but Ireland must be solely for the Irish.”

Newman answered his interlocutors that the Irish were interested in having the best men fill the new university chairs, wherever they were to be found, even though in particular cases there would be differences of opinion. The Irish had the sincere desire to make this institution a real honor to Ireland and a defence of Ireland’s faith.

The objection then arises whether Newman gave too much importance to distinguished teachers.