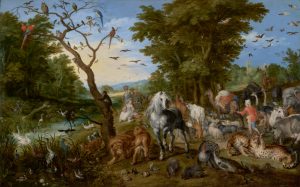 “Hope” … is the name of this poem composed by Blessed John Henry Newman in Valetta, Malta, after his traveling party had been quarantined, and he had suffered a bad cold. Through stark imagery, Newman reminds us that even in a “hope-less” situation of a fallen world, God is in control, working His purpose out. 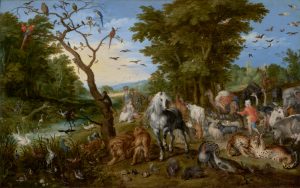 In this two-stanza poem, regular iambic pentameter with end rhyme results in a soothing sound which helps to emphasize Newman’s message of hope.

In the first stanza, we see Noah stepping out of the ark, “his wave-toss’d home,” surveying a “desolate scene” – that is the earth destroyed by the flood. Newman calls the flood a “stern baptism.” Man is given a new beginning. But we, living after the flood, are the children of Noah, that is, a guiltless sire. This is a cause for rejoicing.

The flood destroyed the earth, but a new hope was given to man. And the “bow” which God “set in the clouds” as “the sign of a covenant” between Him and the earth (Genesis 9:13), becomes, in the intriguing imagery of Newman, a foreshadowing of Christ! Just as the rainbow after the earth’s destruction is something that can be admired amidst the gloomy scene, so, too, may we consider Christ, Who stepped from the grave, giving us hope as we await the end of the world which will herald His second coming.

WE are not children of a guilty sire,
Since Noe stepp’d from out his wave-toss’d home,
And a stern baptism flush’d earth’s faded bloom.
Not that the heavens then clear’d, or cherub’s fire
From Eden’s portal did at once retire;
But thoughts were stirr’d of Him who was to
come,
Whose rainbow hues so streak’d the o’ershadowing
gloom,
That faith could e’en that desolate scene admire.

The Lord has come and gone; and now we wait
The second substance of the deluge type,
When our slight ark shall cross a molten surge;
So, while the gross earth melts, for judgment ripe,
Ne’er with its haughty turrets to emerge,
We shall mount up to Eden’s long-lost gate. (Valletta. February 5, 1833).

As the final stanza proclaims, the Lord did come and walk upon the earth, though, “The Lord has come and gone” but we do not despair! Even though we know the end of the world might come in the form of fire, a “molten surge,” nevertheless, our earthly bodies, our “slight ark,” will, like the ark of Noah, survive the fiery surge, bringing us safely to Heaven, though we will still face Judgment.

Christ’s second coming provides us with “Hope”, for now heaven’s gates are opened wide! The hymn of St. Thomas Aquinas, echoing Acts 7:56, speaks of Christ and this, His work:

‘O saving Victim, open wide
The gate of Heaven to man below;
Our foes press on from every side;
Your aid supply; Your strength bestow.’

Therefore, the words of the uplifting last line of Newman’s poem are true; though the earth, with its “haughty turrets” or man-made structures of evil will be destroyed at those end times, we, who have Christ, will emerge from the second destruction and:

“We shall mount up to Eden’s long-lost gate,” a reference to the new paradise, the new heaven and new earth of which Jesus spoke. The mystical body of Christ has its true home in heaven where God awaits His children. The object of man’s hope is not material pleasures or even peace on earth; it is nothing short of God who reigns in heaven.

This is hope indeed!