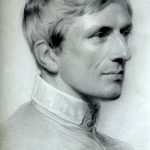 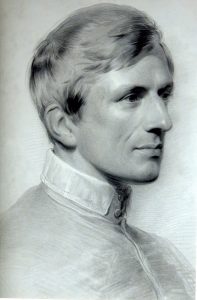 In the sermon “Human Responsibility” John Henry Newman deals with the question: “Does God choose to send some people to heaven and others to hell? And if so, do people have any say in the matter?” He opens with Jesus’ words, “To sit on My right hand and on My left is not Mine to give; but it shall be given to them for whom it is prepared of My Father.” Matt. xx. 23.

John Henry Newman notes: “The Father’s foreknowledge and design are announced, not His choice. ‘Whom He did foreknow, them He did predestinate.’” He prepares the reward, and confers it, but upon whom? No answer is given us, unless it is conveyed in the words which follow, upon the humble:Whosoever will be great among you, let him be your minister; and whosoever will be chief among you, let him be your servant.”

The answer to this question for Newman lies in Jesus’ words at the Last Judgment. The reward is for those who feed the hungry, give drink to the thirsty and clothe the naked. Jesus will tell these “Enter thou into the joy of thy Lord.”

These passages indicate for us the role of human freedom and responsibility in man’s salvation. Newman holds that in primitive Christianity it was believed that God’s grace was necessary to believe and to obey God in everything, from first to last. At the same time it was held that the human mind had from first to last the power to resist grace, and thus the ultimate determination about its salvation or condemnation.

In examining the question, Newman thought that Augustine’s views of predestination were mistaken, most likely because Augustine’s thoughts on the subject were still developing. For Newman, the error lies in the thought that “ … it is God and Christ with whom the ultimate decision concerning the individual’s state depends….” Newman acknowledged that it was a great mystery that one man believes and another rejects the Gospel, and notes that “ … men of reasoning, subtle, and restless minds, have within them a temptation to inquisitiveness; they cannot acquiesce in the limits of God’s revelation….”

God does not have a secret election decreeing life for one and damnation for another. Augustine believed that God predestines all for salvation, and does not predestine anyone for damnation. The thought of the bishop of Hippo was expressed at the Council of Quiercy as follows: “ … the fact that some are saved is a gift of the one who saves; the fact that some perish is the merit of those who perish.” (DS 623). In other words, he did not hold a dual predestination. What he did emphasize was the gratuitous predilection of God and in contrast to the Pelagians man’s absolute need of God’s grace for salvation.

Without denying Augustine’s notion of grace, Newman correctly interprets key passages such as Phil 1:6 in which the promise of perseverance — “He which hath begun a good work in you, will perform it until the day of Jesus Christ;”— as general in nature and do not discard man’s responsibility. He also argues that Phil 2:13: “It is God which worketh in you both to will and to do of His good pleasure” does not deny that man can reject God just as a sick person may reject the medicine of a physician.

Newman rightly states: “In truth, the two doctrines of the sovereign and overruling power of Divine grace, and man’s power of resistance, need not at all interfere with each other. They lie in different provinces, and are (as it were) incommensurables. Thus St. Paul evidently accounted them; else he could not have introduced the text in question with the exhortation, ‘Work out’ or accomplish ‘your own salvation with fear and trembling, for it is God which worketh’ or acts ‘in you.’ So far was he from thinking man’s distinct working inconsistent with God’s continual aiding, that he assigns the knowledge of the latter as an encouragement to the former.” In sum, man must work in securing his salvation. We are responsible before God.

Newman comments on other significant passages such as one from the sixth chapter of St. John. “There are some of you that believe not. For Jesus knew from the beginning who they were that believed not, and who should betray Him… Therefore said I unto you, that no man can come unto Me, unless it were given unto him of My Father.” Newman adds: “ … in the plain meaning of the words, God’s foreknowledge of the issue of free will in individuals is made compatible (though the manner how is not told us) with electing grace.” “Whom He did foreknow, He also did predestinate.” God made us free, and his knowledge of the future does not take away our freedom.

The future Anglican convert wished to distinguish between the promise of salvation and man’s acceptance, God’s election, and man’s faithfulness. His thinking is in keeping with the Catholic doctrine that there are two essential elements in the notion of predestination: God’s infallible foreknowledge ([praescientia) and his immutable decree of eternal happiness. In addition, God does not predetermine the human will. Man must freely respond to the saving grace offered by God. Newman was trying to refute an exaggerated doctrine of predestination in the 19th century which did not respect the mystery of human freedom and responsibility.  Newman would agree with Augustine’s summary of this doctrine found in “The Confessions”: “God who made us without us cannot save us without our cooperation.”