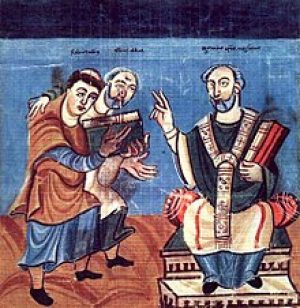 John Henry Newman seeks, in his first Idea of a University discourse, an appeal to common sense. This is in part to defend against what he found to be a common objection, that Catholic education is religiously exclusive. However, in Discourse 1, he concludes with a lengthy reflection on the absolute necessity, historical fact, and ultimate triumph of the Roman Catholic Church. Since the fullness of Divine Revelation is entrusted to the Church, she performs in the world an oracular office, guiding the faithful, and all humans, into the fullness of truth, of which she is the “pillar and bulwark” (cf. 1 Timothy 3:15). He makes this abundantly clear: “Ecclesiastical authority, not argument, is the supreme rule and the appropriate guide for Catholics in matters of religion.” Therefore, any sound education system that strives for Catholicity, as his does, will ultimately need to seek guidance from the Church if it hopes to steer its course aright. In the highest sense, Newman conceives of a Catholic University as employing secular means toward a sacred end: cultivating the seeds of faith into a civilization founded on truth. In this sense, the University is within the stream of the Church’s Apostolic mission, although it may employ methods and practices derived from the surrounding cultural landscape.

Newman responds to fears of religious exclusivity on the one hand, and on the other fears that a Catholic University that appealed to secular principles and reason would be “chimerical.” He insists that Catholicity is the fundamental principle, under whose purview is the fullness of truth as dictated conjointly by Reason and Revelation. Hence, Newman asserts both the intellectual freedom of the University, and its dependence on the Divine Revelation entrusted to the Church. Given the specific challenges of time and place, the University is in the world, as it devotes to perfecting human knowledge and reason, but not of the world, as it is truly Catholic, truly submissive to the aegis and prerogatives of the Vicar of Christ, the See of St. Peter, whose guidance of the faithful is definitive and heavenly, not prevailed upon by the gates of hell (cf. Mt. 16:17-19).

Then, without qualification, Newman reminds that St. Peter, speaking through the Holy See, “… for eighteen hundred years has lived in the world… seen all fortunes… encountered all adversaries… shaped himself for all emergencies.” And he clarifies that formulations of the spiritual authority of the “Chair of the Apostles, the Vicar of Christ, and the Doctor of [Christ’s] Church” are not “words of rhetoric… but of history.” As a simple matter of historical fact, all those “… who take part with the Apostle, are on the winning side.”

Therefore, the Church does not shy away from matters of expedience and practicality when attempting to root Catholicity in a given culture. Newman locates his own project in Ireland within the entire Apostolic history of the Church’s mission, recounting a hall of fame of zealous saints on a mission to the ancient Celts and Saxons. Catholic university education is within the same stream of Apostolic mission that brought the Church from the ancient evangelization of Sts. Patrick, Wilfrid, and Cuthbert to the high medieval cultivation of learning and rule in Alcuin and Charlemagne. Newman sees himself on the same mission, in which “ … the See of Peter [gives] first faith, then civilization,” binding “ … them together in one by the seal of a joint commission to convert and illuminate in their turn the pagan continent.”  The Church aims to educate the nations in the fullness of truth–to give them first faith, then civilization. The Church’s … “zeal, charity, mission, [and] gifts … ” are always the same. All nations share in “ … the joint work of teaching … ” given by the Church,  and this mission continues into the present and future, when “ … we shall become one again, while we zealously and lovingly fulfill [her mission].” Behind all human education is a greater Divine Education. God gives to the Body of his Son, the Church, the mission to beckon, cultivate, and teach all nations His truth. In Him they realize in themselves the fullness of charity, the image of Christ, by the power of our supreme Teacher, the Holy Spirit. Newman leaves no doubt, in Discourse 1, that this fundamental reality undergirds his search for sound principles and practices with which to found and sustain his University.