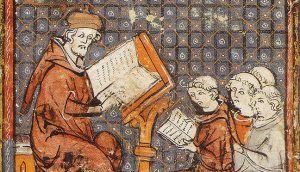 In the last post on Idea of a University, Discourse 3, we saw an important principle in Newman’s philosophy of education: all diverse knowledge forms one whole. God and his creation, the visible and the invisible, physics and metaphysics, mathematics and poetry, are all connected. Therefore, theology does not only bear upon other branches of knowledge by necessity, but is the essential connection between them. These are statements of fact and reality, not idealism or speculation.

Newman says that “knowledge is power;” not brute animal force, but intellectual apprehension. To be a fully formed human being is to know in order to act—to be in tune with reality through rational awareness in order to know how to effectively behave in that reality. I can use a hammer appropriately in reality—to hammer nails-—if I know what it is. If I try to use a hammer otherwise—say, for trimming fingernails–I have faulty knowledge about the hammer. But a Supreme Being, God, is supremely important to know about, because he relates to everything in reality, especially our selves, as Creator. If God exists, and man does not know this God, then he will fail to act in accord with reality, and his power will be severely limited. But why is this relevant to education? Newman thinks, for two reasons. First, it means that monotheism (and, Newman would add, the whole of God’s Revelation and Christ’s teachings entrusted to the Catholic Church), is a plausible and reasonable object of scientific knowledge; in other words, learning about God in school is appropriate and essential. Second, to deny the first reason–to leave objective inquiry about God out of schools–is not just a random avenue in private or cultural opinion, but is a fundamental error in knowledge of a fundamental reality. Schools exist to teach students about reality that they might act in reality. Knowledge about God is fundamental to knowing anything else. God is supremely real. Therefore, to fail to teach about God—a widely accepted trend—leads to a demise in the ability of the student, and eventually a whole society, to know, act, and participate in reality.

Today’s Western culture is in an advanced stage of a cancerous toxin Newman identified over a century and a half ago. Newman sought to redeem theology from the whimsical winds of private judgment and subjective interpretation, which would lead, and has led, to removing true theology from schools entirely. Studying God, by definition, is objective; either God exists or he does not; God has either spoken, or he is utterly mute and dumb. Newman concludes Discourse 3 with an important challenge: a “positive denial” of the truth of monotheism is the only true option besides upholding theology as an objective science. Relativism cannot broach theology, even on its own terms. A strict repudiation, a philosophical and scientific proof against the reality of an intelligent Creator and supreme monotheistic being, should be required to dethrone theology from her historic seat as the “queen of the sciences.” And even if this could be done, history would not be on the side of the detractors. Newman asks about the objective truth of monotheism: “When was the world without it? Have the systems of Atheism or Pantheism, as sciences, prevailed in the literature of nations, or received a formation or attained a completeness such as Monotheism? We find it in old Greece, and even in Rome, as well as in Judea and the East. We find it in popular literature, in philosophy, in poetry, as positive and settled teaching.” Newman would not be surprised to have seen in the course of the 20th century that Atheism and Pantheism do not prevail as systems of settled truth, but grow and squirm like tumors into the brute tyrannies of autocrats like Hitler, Stalin, and Mao.

Newman makes it abundantly clear: “ … to withdraw theology from the public schools is to impair the completeness and to invalidate the trustworthiness of all that is actually taught in them.” Without theology our children are not prepared for reality, our society filled with misguided, lost, and hurting people. To learn, on the other hand, that one can objectively rest one’s mind and being on the settled truth of a benevolent God who is love and who guides history, is to learn that “Religious truth is not only a portion, but a condition of general knowledge … To blot it out is nothing short … of unravelling the web of University teaching.” Without theology, our schools are like mere rhetoricians with no substance, our teachers are like words with no meaning, and students like dramas with no central plot. Without theology, the web of our hearts, minds, and relationships unravel and we become, in C.S. Lewis’ phrase, “men without chests.”