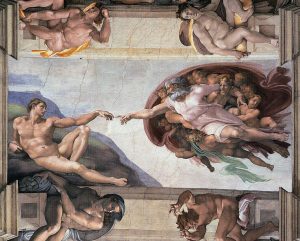 In a 2013 article, writer Tara Burton at The Atlantic makes the intriguing argument that theology should be a necessary part of a liberal arts curriculum. Citing her experience studying theology at Oxford University, she notes how exciting it was because of its overlap with many other humanities disciplines. “If history and comparative religion,” she writes, “alike offer us perspective on world events from the ‘outside,’ the study of theology offers us a chance to study those same events ‘from within’: an opportunity to get inside the heads of those whose beliefs and choices shaped so much of our history, and who … still shape plenty of the world today.”

Burton’s intuition of the limitations of mere “comparative religion” is correct, but Newman would see her solution as not much different. Burton has merely shifted the focus to “comparative theology,” a survey of varying perspectives “from within,” looking closely at the actual beliefs of historical figures and their impact on history (which, indeed, just describes what a good historian should do anyway!) This is still a far cry from where Newman, and classic Christian thinkers (not to mention the heritage of Oxford theologians) would like to see theology. Theology’s true natural habitat is in philosophy, and Newman goes so far as to say that philosophy, and other disciplines, are worse off without it. This is natural theology, the highest field in philosophy, which seeks to investigate God’s existence and attributes scientifically. Newman would insist on true theology as a philosophical science of the highest order, wherein one seeks to discover the truth in his or her field. For theology, this means seeking the truth about God.

The ancient Greek philosopher Aristotle called philosophy the science that considers truth, which includes the material world but also looks behind it at its principles and causes. And this, indeed, describes the behavior not only of the good philosopher or theologian, but also of the good scientist, whose experiments are conducted under the conviction that some kind of objective truth is indeed discoverable in the visible world. Newman would say this is equally true of the invisible world. Newman uses a much richer sense of the word “science,” which literally means “knowledge,” or refers to the act of knowing. Thus, inquiry into the visible and invisible worlds can both accurately be described as science, seeking to understand the fulness of things outside of us.

But what actually constitutes science, in both cases, is drastically misunderstood today. These misunderstandings began in Newman’s time, and grew into what some have called ‘scientism,’ which mistakenly believes that a narrowly mathematical or physical science is capable of proving or disproving metaphysical truths, like the existence of God, the moral law, the origin of the universe, or the origin of species. Science (in this sense) can provide elements that lend toward plausibility in these areas, but not in the same way that the scientific method can prove a hypothesis through repeated and observable phenomena.

True science is not limited to only visible phenomena. Aristotle studied the being of things, the nature of their existence, in a scientific manner. And this can be done with God himself. The idea of God—that, as Newman says, “ … behind the veil of the visible universe, there is an invisible intelligent Being, acting on and through it, as and when he will … ”—is an objective reality that can be analyzed scientifically. It involves a scientific discipline aimed at the fundamental reality of “Divine agency,” or the objective activity of God in eternity and human history.

Knowledge of God’s agency is both plausible and reasonable. To ignore “Divine agency,” Newman says, “is a virtual denial of God.” To deny that God is a real agent behind every part of existence is the same thing as denying the existence of God himself. So, on the other hand, if God really does exist, then knowledge of his active existence is objectively knowable. Further, such knowledge of a God whose activity is behind all aspects of existence is vitally and essentially connected to learning about everything else: mathematics, physics, history, anthropology, art, etc. Newman says that without God, our knowledge of nature and man will be “more or less unreal.” To fail to teach robust and objective theology to human beings at a university is to fail to prepare them for the real world!

Newman says, “Truth is the object of knowledge,” and “granting [that] Theology is a real science, we cannot exclude it, and still call ourselves philosophers.” In a beautifully moving passage, Newman notes how this involves a deep connection between Reason and Revelation wherein we realize that all things are from our “Eternal King,” who blesses our studies and arts, laws and societies, and offers his “co-operation.” God has made us to know him, has made us to know the world, and has made the world able to be known by us. We live in a world of what philosophers call intelligibility—of communion and communication—where, at our deepest level, we can know and be known. According to Newman, without operating with this awareness of how things are in reality, we cannot be true knowers, true philosophers, true scientists, or our true selves.