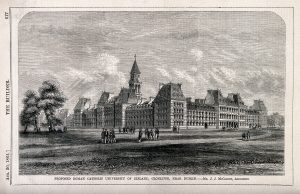 To risk a grave understatement with which no one will disagree, education is important. However, Discourse 4 of Idea of a University helps us defend against seeing education as the only, all-sufficient solution to all of our problems. For instance, moral formation is not unrelated to education, but, for Newman, is never the final goal of a University. People arrive at a University with the purpose of pursuing knowledge and “intellectual excellence.” This implies a certain level of moral formation, but the moral formation is not its goal, lest the University become a Church, or a Temple, or a Department of the State, or a Penitentiary.

In explaining why Newman made a sharp distinction between “intellectual excellence” and “moral transformation,” the former the goal of a “liberal education” and the latter the goal of the Church, Newman scholar Frank M. Turner, in an essay “Newman’s University and Ours,” says that “Newman was no educational utopian.” Newman knew from experience that schools must be free to be schools, and the Church must be free to be the Church, and only thus could the two properly relate. Therefore, Newman heavily affirms the good of a “secular” dimension to education, which forms an important natural component that is perfected by supernatural grace, with the purpose or end of intellectual excellence. To put a twist on one of Newman’s phrases from University Sketches, a liberal education is critical to our well-being, but is not the primary source of divine truth or the essence of human redemption. For that, we need primarily Christ and his Church. For Newman, the University can at best make only very modest claims to be in the business of moral formation, lest it encroach upon the domain of the Church.

This appears as a strange and complex web. What is “secular” education? What is “religious” education? How do they relate? What is “intellectual excellence,” and how does it relate to “moral formation?” Are these distinctions even correct to make in the first place? Discourse 4 will help us puzzle over these questions in two ways: 1) in affirming that Revelation is a part of the “web” of knowledge Newman has woven in Discourse 3; and 2) in explaining why Newman is keen to make a distinction—but, note well, not a separation—between secular and religious knowledge, between “intellectual excellence” and “moral formation.”

First, Newman builds off of Discourse 3 (The Bearing of Theology on other Knowledge) by describing Revelation, God’s gracious and definitive communication to Man about Nature, Man, and Himself, as a vital and inextricable part of the “web” of human knowledge: “revealed truth enters to a very great extent into the province of science, philosophy, and literature.” To keep the two separate is in fact a “great damage” to science. Newman does grant that there are degrees of damage. “Pure mathematics,” for example, may be less directly damaged than “politics, history, or ethics.” However, since all of the “various branches of science are intimately connected with one another and form one whole,” even the minor damages are detrimental to the whole. Therefore, he upholds, in a classic Victorian understatement, that “revealed knowledge is very far indeed from an inconsiderable department of knowledge.”

Newman describes Revelation as “the written and unwritten word of God,” referring to Scripture and Tradition which, in the language of Vatican II document Dei Verbum, together form a single mirror in which the “pilgrim Church on earth” looks at the reflection of God in heaven. And God, as the summum bonum simpliciter, the supreme good simply in Himself, through his Revelation “furnishes facts to the other sciences, which those sciences, left to themselves, would never reach;” and it “invalidates apparent facts which, left to themselves, they would imagine.” Newman’s language is strong here, since he has already described knowledge as the apprehension of “facts and their relations.” In his view, there are some things within the domain of real knowledge—that is, facts—which can only be revealed by God, and these facts are vital to scientific disciplines.

Newman cites the example of the preservation of mankind in Noah’s ark as a “historical fact;” and he cites the way in which Revelation contradicts the notion, in “physiology and moral philosophy,” of “our race’s progress and perfectibility,” perhaps in reference to various social theories growing in his lifetime, claiming that humans could arrive at perfection through genetic, economic, and material means.  In any case, Newman strongly upholds a notion upheld by the Catholic Magisterium, famously articulated in St. Pope John Paul II’s 1998 Fides et Ratio: that Reason and Revelation together bear witness to what is real, and that lacking the fulness of the one or the other is not knowledge but ignorance.

Thus, we see Newman affirm the essential role of Revelation, of the Church, of Grace, in the intellectual life of man and, by extension, its necessity for the flourishing of the University. In a second and third post on Discourse 4, we will explore what Newman thinks happens to “secular knowledge” if it foregoes the divine knowledge of Revelation. This will also help us understand why, even in light of his comments on Revelation, Newman is also keen to keep the end, the purpose, the essence, of the University as “intellectual excellence,” and not other albeit noble and in their own right essential human aims.