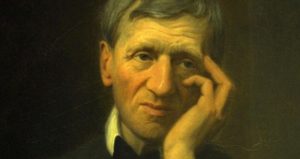 John Henry Newman repeatedly asserts, especially in Discourse IV of Idea of a University, that God’s Revelation is a vital part of the human “web of knowledge.” All knowledge is connected. Biology depends, for example, on chemistry and mathematics in order to fully understand living organisms. Further, data analysts have noticed an interesting trend: if one visually maps out the cross-citations made in academic journals to other disciplines, the map begins, in time, to look like a perfect ring, and “Religion” shows up right in the middle (see “Click-Stream Data Yields High-Resolution Maps of Science”). 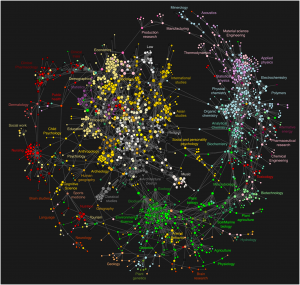 Newman, of course, has already asserted that, in principle, Theology is at the center of all knowledge. God is real, and has spoken, and this affects our knowledge of everything else. But Newman would also say that failing to hear this divine voice at the center of all knowledge tends to degrade all other forms of knowledge. It disrupts the web, leaving human knowledge in a worse, less enlightened state. Assuming the full realness of God’s being and his communication with creation, it may be asserted that “Revealed Religion furnishes facts to the other sciences, which those sciences, left to themselves, would never reach; and it invalidates apparent facts which, left to themselves, they would imagine.” In contrast to some mistaken notions, Newman goes on to say, “It is not then that Catholics are afraid of human knowledge, but that they are proud of divine knowledge, and that they think the omission of any kind of knowledge whatever, human or divine, to be, as far as it goes, not knowledge, but ignorance.” To deny God’s creation and revelation takes away from human knowledge, and leads human scientific disciplines into ignorance, and error.

Newman sees this “web of knowledge” as an organic entity, wherein scientific and philosophical disciplines have a real and proper place. But error arises when you “drop any science out of the circle of knowledge,” because “ … you cannot keep the place vacant …” it is “forgotten,” and “ … the other sciences close it up, or, in other words, they exceed their proper bounds, and intrude where they have no right.” For one piece of knowledge to fall out, the other pieces will begin to think they are something they are not. St.  Paul’s image of the body of Christ is apt. The foot cannot claim to be the head; rather, each has its own unique gifted role from the Holy Spirit.

So, in Newman’s thought, to forego one discipline of knowledge is to leave the others to “make up” for its lack by trying to be something they are not. For instance, Newman imagines (not without precedent in modern history) what might happen if ethics is dropped from the “web of knowledge”: it would be split up between “law, political economy, and physiology,” all of which would now presume to answer the questions and apply the solutions that belong properly to ethics.

He imagines what might happen if “experimental science” became a mere “Antiquarian Society”: archaeology would become the only method of testing physical phenomena; or if history was “surrendered” to metaphysics, inquiry into what is most fundamentally real would become a mere matter of historical record. Newman, of course, is concerned in these examples about a trend in his own day: pure materialism, the assumption that all that is amounts exclusively to historical and observable data, which was taking over philosophical disciplines. History, archaeology, and experimental science are vital disciplines that should never be neglected, but they are not philosophical disciplines, and damage themselves if they presume to answer philosophical questions within their own categories.

For Newman, this is evident in what happens when Theology is left out of the “web of knowledge:” the other disciplines are damaged by having to answer the questions and  apply the solutions that are proper to theology. Theology would become “the prey of a dozen various sciences,” and those sciences would be “plainly exceeding their rights and their capacities in seizing upon it.” Before diving into details, Newman lays out this “broad principle”: there is “no science whatever, however comprehensive it may be, but will fall largely into error, if it be constituted the sole exponent of all things in heaven and earth … for the simple reason that it is encroaching on territory not its own, and undertaking problems which it has no instruments to solve.” Pride led the devil, and leads sinners into thinking they can be like God by their own power, and are led into confusion and destruction. Just so, lacking Theology in the “web of knowledge” leads the other disciplines into presuming Theology can be within their domain, bringing intellectual error and dissolution.

But this requires admitting something very difficult for modern man: that human intellect does not stop at the visible senses, but “perceives in sights and sounds something beyond them.” This is a scientific, not just spiritual, process, since “Science and Philosophy … are nothing else but this habit of viewing, as it may be called, the objects which sense conveys to the mind … throwing them into system, and uniting and stamping them with one form.” Newman says this method is highly natural, and is a feature of all human minds. But as human knowledge expands, specific knowable objects become more and more apparent: mammals, rocks, gravity, angels, ocean currents, beetles, black holes, democracy, galaxies, and God himself are all real things that may be known through connected, although distinct, methods, that take us from the senses to something beyond them.

In a  classic turn of phrase, Newman suggests that we in fact crave and demand to observe these real objects: “We cannot do without a view, and we put up with an illusion, when we cannot get a truth.” If God or any other real objects are left out of the buffet table at which the human mind may feast, we will want some strange falsity in its place. We will begin worshipping an intellectual idol of our own devising.

Without Theology, other academic disciplines become intellectual idols. In this excess, those disciplines break their own bounds and damage themselves. In a final post on Discourse IV, we’ll see how Newman thinks this damage could extend beyond an individual discipline to Religion itself.