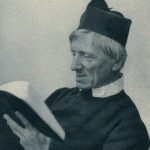 In “Choruses from the Rock,” poet T.S. Eliot asks, “Where is the wisdom we have lost in knowledge? / Where is the knowledge we have lost in information?” St. John Henry Newman helps us understand the problem Eliot notices in a civilization that has, in Eliot’s phrase, “Knowledge of words, and ignorance of the Word.” Newman’s admirable prose in Idea of a University affords reflection on the role knowledge plays in human flourishing. As rational creatures made in God’s likeness, it is good for us to spend some time thinking about, and growing in, the way we glorify Him in our thoughts and words. While his argument is ultimately about what “intellectual training” ought to look like in a University, his insights are useful for men and women in all walks of life.

Newman makes an important distinction: cultivating true intellect is not mere acquisition, but is exercising thought or reason upon knowledge. He elaborates that, therefore, a sort of “ascension” above acquired knowledge is required, what he calls “generalization” or “method,” “principles” by which one might “shape” acquisitions of knowledge. Our minds are not mere encyclopedias of facts that grow by addition; they require a kind of complex multiplication, the cultivation of categories, forms, and outlines of the general scope of what is learned, such that all facts acquired may be truly understood, not merely obtained. This is what makes the difference, for example, between merely memorizing the words of a great Shakespeare sonnet, and understanding what the words, and the poem as a whole, mean.

By analogy, Newman says that cultivating thought or reason, not merely acquiring knowledge, is like gaining a higher vantage point while traveling through a complicated geographical terrain of hills and valleys, or through a dense jungle, or through close winding city lanes. To find a view from a rising hill or a church tower or some higher ground allows one to survey the whole of a strange city. Indeed, even acquiring a map serves this purpose, literally giving one a bird’s eye view from which to deduce current location and infer possible routes of travel. This higher view gives you bearings, a sense of location, an understanding of where you’ve been and where you are going. It is to gain a glimpse of the whole by which the ceaseless and chaotic flow of new places makes sense. To fail to find a higher vantage is to condemn oneself to ignorance, a disconnected view, a blindness of the whole. It is to be lost.

When traversing the foreign field of new knowledge, failing to gain a higher knowledge of the whole—which is to exercise reason, judgment, thought, or generalize to gain mastery over particulars—makes one lost and blind. Newman’s analogy is forceful. He thinks that a “loss of control over the sequence of ideas,” or reading “without thinking,” or acquisition of objects of learning without the exercise of Reason, is in fact the definition of insanity. It is the mark of the “madman,” a human being who is failing to flourish. Those who “break up their subject into details” and analyze its parts without recognizing the generality of the whole, “destroy its life,” like Dr. Frankenstein, so intoxicated with mastering the secrets of life that he violates life itself and creates a monster. Such knowers and readers are “only possessed by their knowledge, not possessed of it.” Their knowledge masters them, and they become enslaved to it. These madmen who look to facts without reason have “over-stimulated the Memory.” Their “Reason acts almost as feebly and as impotently as in the madman,” and they become the obsequious votaries of a half-truth, a fragmented part of the whole. Truth is reduced to a broken stammering, a chaotic flow of random trivia, distorted by an unreasoning mind.

On the other hand, the mark of sanity is recognition of order and meaning, seeing parts in the whole and the whole with reference to its component parts. Applying reason to knowledge is the real mark of a liberal and universal knowledge, which is simply to be an intellectually healthy human. The business of the University, therefore, is to promote the intellectual health of the mind, the full flourishing of reason in man.

When Newman speaks about mere “acquisition” in contrast to true intellectual development, he has in mind the dangers of “over-education,” that is, saturation in facts without meaning. However, he admits the opposite danger, under-education, is more characteristic of his own time. In the frenzy to learn all things “at once,” nothing is learned well, but all is learned badly. This kind of anxious impatience of the instant expert is common today, and Newman’s voice is badly needed. Without any grounding patient thought there can be no true liberal learning. There might be many books, a proliferation of words, the clangor of loud voices, but there is no real advancement in intelligence. This is why, in his wonderful essay on elementary education, he exhorts children to learn “a little, but well.” Especially early on, learning habits of excellence and thoroughness is more important than volume of content.

In an odd twist, Newman concludes by suggesting that it may even be better to never go through formal education than to receive the poor formation of “mere acquisition.” Better, he thinks, to enter a library and read books off the shelf at random, following impulse and intuition but at least taking the time to think and learn, than to enter the treadmill of mere achievement. Better to be a real human being with an “independent mind” than to become a distorted mind with no real thought, no matter how elite or impressive the resumé. To learn, to think, to reason, is to be human, to glorify our Creator with our minds. In our various spheres of influence, we must remain grounded in this truth as we promote the cause of Catholic education. In the midst of a world over-saturated in mere information, proliferating and consuming words with no time for meaning, we must be patient to cultivate real knowledge and deep attention.