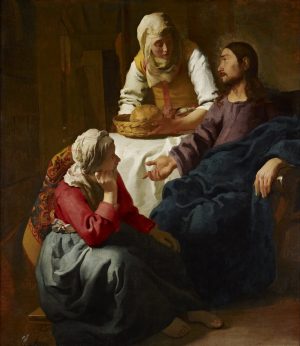 The Church’s liturgical cycle has recently invited us to reflect on Martha and Mary, Martha “concerned about many things,” and Mary having chosen “the better part” at Jesus’ feet, a part that will not be taken away from her (Luke 10:38-42). It is a well known theological tradition that Martha represents action, while Mary represents contemplation; Mary listens in adoring silence to the Teacher, while Martha serves on behalf of the Suffering Servant. Christ does not deride Martha in favor of Mary, but suggests that Mary’s intimacy has priority–we should do all things with Christ and for Christ. If we are all Martha and no Mary, our active service will become self-serving and misguided. Together, Martha and Mary represent the universal call to holiness, the mark of sainthood: heroic virtue and heroic prayer. The two can never occur in isolation; heroic virtue flows from heroic intimacy with Christ in contemplation.

In an analogous way, Discourse 7 of Newman’s Idea of a University presents a similar dynamic when it comes to education. His insight is just as crucial to the formation of our children as Martha and Mary are to understanding sanctity. In previous discourses, he has established key principles that he now builds upon (that the highest aim of education is teaching knowledge, that theology is an essential and scientific part of education, and that learning knowledge is good in and of itself–see here for some review).

Most proponents of educational reform today focus on the way in which students will be prepared for society, job, career, or college, or given practical skills with which to excel in these. The implication is that questions of education are mostly about impact on society, not about the particular flourishing of each child. Even those who defend classical education (or what Newman would call liberal education) might advance some variety of practical argument. And Newman does not think this is bad. But he has a very unique approach that is highly relevant and eminently practical.

In Discourse 7 Newman warns us against educationalists who make “Utility” their “watchword,” who “confine” education to some “particular and narrow end,” who try to identify which student will be a lawyer, which an engineer, which a surgeon, and determine those exclusive educational paths as early as possible. Newman turns this kind of pragmatism on its head, and argues that the best lawyer, the best engineer, the best surgeon, is the one who early on is allowed to let his mind range far and wide, who can roam in the pastures of knowledge freely. Newman thinks the best practitioners in any narrow field are those who have been trained in a wide, liberal education.

Newman himself is a sterling example of this. Not only an accomplished writer, philosopher, theologian, teacher, and educational entrepreneur, he also applied himself to a wide amount of practical arts throughout his lifetime. In his early days as a student he was attracted to studying geology and mathematics. He was an excellent violin player, and was known to weep at the beauty of his playing. At the establishment of his English oratories, he had a direct hand in planning the layout and architecture. He filled in as an organist when his parish needed one, and wrote nearly an entire volume of poetry in the 1830s for the sake of evangelizing England to a more historic and apostolic understanding of the faith, published with poems by other authors under the title Lyra Apostolica. Newman’s interests and practices were as wide and liberal as the kind of education he defended. He can recommend it because he mastered it.

In Discourse 6, he has insisted that the cultivation of intellect is its own sufficient end. Knowledge is intrinsically good, good just because, in that knowledge is necessary for perfection of the mind, just as a flower perfects the plant, adding beauty and attracting bees. Knowledge might lead to other practical fruits and good effects, but those things are not what make it intrinsically good. Learning is self-justifying; it does not need any external standard aside from love of learning. Such freedom to learn inclines one to “apprehend and contemplate truth,” to gain capacities to think and attain “intellectual perfection.”

But here, in Discourse 7, he is interested in granting a certain pragmatic point, a certain “Utility” that he has previously rejected as proper to the cause or essence or end of knowledge, but which is its legitimate effect. He asserts, it is a “matter of rule,” a principle, that “disciplined for its own sake,” not “being formed or sacrificed to some particular or accidental purpose,” a mind truly formed in “Liberal Education” is ultimately of value in social and civic spheres. But it does not become so by making such practical value the end goal. Making knowledge for its own sake the main goal, one’s reason is enlarged or expanded, one learns to think, and a high “standard of excellence” is set for all activities. Christ says “whoever would save his life will lose it, and whoever loses his life for my sake will find it” (Matthew 16:25). By analogy, Newman’s argument is, in sum, that whoever seeks utility for its own sake will lose it, but whoever loses utility for the sake of liberal education will find both. If one wishes to be of practical use in the world, he must surrender his mind to the truth wherever it leads, even to the possible exclusion of an initially practical plan. Lacking such openness, not only will the truth not be known, but any potential utility itself will be diminished, since one will tend to bend and misconstrue truth to fit a predetermined framework, doing the thing one had imagined doing without any reference to what is true about it.

Rather than confining the purpose of education to some “particular and narrow end” that can be “weighed and measured,” Newman sets higher ambitions and a more dignified aim. Attaching a “mere price” to what is useful in education is an unhealthy, cramped, nearly immoral basis on the philosophy of “Utility” that is entirely inappropriate for education and unfair to the students whose minds are in need of formation. Think back to Mary and Martha–Mary’s is the better part, the part that cannot be taken away, while Martha’s service requires an orientation toward Mary’s priorities to best flourish. By analogy, a liberal education is the “better part” that can never be taken away–a love of learning for its own sake. This love of learning is what all practical utility or social usefulness flows from. But to devote to practical utility without love of learning will disorder the utility anyway–it will confine it to an anxious and tunnel-visioned action that becomes lost in its own self-absorption. The truly active mind is the contemplative mind, the mind that seeks knowledge and truth both within and beyond the shifting sands of practical demands and limited calculations of usefulness. Newman values both, but indicates to us how practicality thrives only with a higher habit of love for knowledge for its own sake.

I will explore Newman’s case for liberal education in more depth in subsequent posts, as well as his startling analogies that help us understand the profound truth of what he argues, and the reasons why we desperately need this message now. Increasingly in our time, children in schools are becoming the “guinea pigs” of society, their bodies, minds and souls literally experimented with to re-shape society in our own image. Granting that each child is made in the image and likeness of God, and that they are ultimately made for the reality that God has made, Newman has something much more stable, holistic, and healthy in mind for our children’s formation, something that every parent, educator, and leader should harken to.