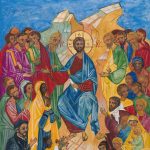 Every so often I will ask my literature students to do something, like write a short poem, just for fun. Inevitably, at least one student asks, “is this for credit?” or, “can we have extra credit?” My answer is always no, and I will sometimes tease them by asking if they also want extra credit for playing frisbee, or chess, or basketball, at lunch. There are many things we do—learning, seeking knowledge, and gaining skills included—that are done for no extrinsic reward, but simply because we enjoy them. They are goods in themselves. I don’t blame my students for wanting credit for class activities; I indeed encourage them to strive for excellent grades and performance. But excellence is the fruit of immersing oneself deeply in learning freely. This is, in sum, Newman’s view of liberal learning. Learning is a naturally enjoyable activity that, sadly, modern education tends to stultify and disenchant, leaving our children cynical and traumatized in the very classrooms where they should feel joyful and free.

Newman largely blames philosopher John Locke for the demise of liberal learning. Locke argued, anticipating the later American John Dewey, that most ordinary and classical subjects in school should be jettisoned in favor of subjects that “might be useful” after school. Locke calls, for example, poetry “a pleasant air, but barren soil,” and thinks preparation for a “trade” is more important than learning Latin. John Locke’s modern philosophy is now pervasive, and tends to denigrate all traditional subjects as abstract ivory towers, scorning any who think it is worthwhile to learn things that are not in immediate marketable demand. This tends to include a priority for the hard sciences and rejection of humanities or classics, and a reduction of those humanities and classics to mere acquisition of variously branded “skills.”

What Locke rejects, Newman calls “the general cultivation of mind,” the liberal and free and expansive development of mind that is not isolated to a narrow demand, but enables excellence in anything, or what he calls “the imperial intellect.” With a “general cultivation of mind,” Newman argues, those who insist on exclusively practical learning will not only lack humane learning, but also ironically contribute to impractical outcomes because they will not enjoy the healthy formation of the whole mind. They might become literate in a subject, but will not have learned to think. A good quarterback exercises his whole body, not just his throwing arm. If he only exercised his throwing arm, he would not be a good quarterback. Just so, the good student must exercise the whole mind, not just one or a few parts of it. Newman insists that this full maturation of the mind is of a “liberal or non-professional” value. It is good in itself, not good because it can be reduced to professional value.

Newman counters Locke with an apt medical analogy. A “healthy body” is an intrinsic good, not an instrumental one. We seek to be healthy for the sake of being healthy, not merely because being healthy allows us to do a few narrow tasks. I might be an electrician by trade, and in my free time like river rafting, painting, gardening, taking my kids on vacation, and writing novels. But when I go to the doctor with an illness, or injury, or broken finger, I seek healing not just because I use various aspects of my body for work or recreation or vacation, but simply because being healthy is a good thing. In other words, even if I had none of these specific applications of my bodily functions, I would still seek healing, because health of the body is intrinsically good for its own sake. How much more, Newman argues, is a “healthy intellect,” a fully formed, fully usable mind, an intrinsic, self-justifying good? This is in fact the definition of sanity. Its Latin root, sanitas, simply means “healthy” or “well.” Mental health, like bodily health, is the flourishing of the whole, not just parts. If “a Liberal Education consists in the culture of the intellect, and if that culture be in itself a good,” then it is likewise intrinsically good to seek full formation of mind in accord with that good. The intrinsic goods of a healthy body and fully-formed mind transcend, but still include, any practical uses of them. Newman argues that this “mental culture” is in fact most supremely useful. Who would seem more useful in any given employment or trade or discipline—the one who is trained to use his whole brain, or the one who is trained to use just parts of it?

What doctor, when diagnosing his patient, would determine whether or not to operate, or apply a remedy, based on which part of the body his patient would use for his formal employment? If a doctor consented to heal an arm, but refused to heal a foot, because the patient only used his arms and not his feet for his work, the doctor would justifiably be accused of malpractice. Just so, good educators should devote themselves to the full flourishing of each human mind. A poor educator, regardless of his good intentions, would educate a narrow aspect of the mind, rigidly calculating what is useful and confining his pupils’ mental capacities to some pre-determined agenda. No knowledge of God’s good creation should be withheld from our children; they flourish more, are more successful, are more useful, and more gloriously reflect their Creator, in the same degree to which they are free to pursue knowledge just because it is good. May the Holy Spirit inspire our parents and teachers with the grace to foster educational atmospheres that are truly enjoyable for students, first, by being inspired ourselves to truly enjoy the free pursuit of knowledge.