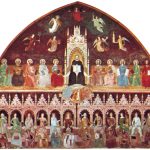 In 2017, Silicon Valley tech mogul Anthony Levandowski announced his sincere intention to start a new religion (reported by Mark Haris at wired.com). Under the belief that super-intelligence would soon rapidly proceed to self-governing robots and super-computers that could manage humanity better than humans, he thought his new religion, “Way of the Future,” would help ease the “Transition” through worship of Artificial Intelligence. The kinds of computers on the horizon, he argued, would essentially be gods by virtue of their massive intelligence, and he would like to make everyone, not just computer scientists, feel like they have a part to play in the new order through participating in his cult.

This harrowing real-life dystopia is perhaps not so much a disturbing new development as a visible revelation of what has long been an invisible problem: man’s tendency to worship his own creations, to deify his own ingenuity, to obsessively seek divinized power through knowledge, like Dr. Faustus and Dr. Frankenstein, builders of Towers of Babel, old and new. It is at root a spiritual problem, one that St. John Henry Newman brilliantly exposes in the conclusion of Discourse IV of Idea of a University.

Discourse IV is all about the relationship between theology and other disciplines of knowledge. Newman thinks theology is at the center, and all the other disciplines suffer if it does not retain this privileged place. “Revealed Religion,” the kind of dogmatic theology he has in mind, is what all other disciplines seek to become if they fail to recognize theology as its own discipline with unique standards. “Many men there are,” writes Newman, “who, devoted to one particular subject of thought, and making its principles the measure of all things, become enemies of Revealed Religion before they know it.” Newman says this is the case because each discipline “has made [its] own science, whatever it is … to the neglect of Theology, the centre of all truth, and view every part or the chief parts of knowledge as if developed from it, and to be tested and determined by its principles.” Each discipline begins to judge every other discipline through its own principles, and fails to acknowledge the principles of other disciplines. Each sees itself as the definitive authority of all things, a role only truly played by the science of theology.

Further, Newman thinks this will naturally develop into an antipathy for real theology, for real religion. Of the thinker caught in this tangle, Newman says “ … an exclusive line of study has led him, whether he will or no, to run counter to the principles of Religion; which principles he has never made his landmarks, and which, whatever might be their effect upon himself, at least would have warned him against practising upon the faith of others, had they been authoritatively held up before him.” If he would just have ears to hear, religion would be able to authoritatively teach the scientist of the boundaries between his own and other disciplines. Instead, this kind of misguided science will, divorced from theology, always set itself in the place of God as the “summum bonum,” the greatest good.

More concretely, Newman shows by example how this problem includes confusing “moral sciences” with pragmatic or natural sciences, like “Political Economy.” Economists will begin to seek answers to questions proper to the domain of ethicists and moral theologians, arguing for expediency or efficiency when the real issue is one of human dignity and spiritual well-being. Assuming the “absence of all real religion,” thinkers like political economists will begin to see “the pursuit of [material] gain” as the only real source of “virtue, religion, happiness,” and “the pursuit of wealth” the only “great source of moral improvement,” failing to hear the Divine Shepherd’s words that “money is the root of all evil.”

“Private Judgement,” Newman goes on to say, will infect what should be scientific disciplines. Evolutionary theorists will deny the existence of God. Logicians will deny the Holy Trinity. Historians will deny the reality of miracles. In each of these cases, there is a purely technical problem: a theological claim is being made without reference to theology. A discipline separate from theology has presumed to make itself the measure of theology. For Newman, the great crisis of our modern age is quite simply forgetting what theology is, and what it isn’t. He concludes, “[If] Theology be not taught, its province will not simply be neglected, but will be actually usurped by other sciences, which will teach, without warrant, conclusions of their own in a subject-matter which needs its own proper principles for its due formation and disposition.” This is perhaps why higher academia is increasingly alienated from the wider culture; on the one hand, overly-specialized experts only exist in their own echo-chambers, and, on the other hand, self-styled cultural theorists mix and blend the boundaries of disciplines in a frenzy for ‘interdisciplinarity’ and ‘intersectionality.’ Both are a symptom of having lost what tutor them in their proper boundaries and relations, and grant them objective freedom to fully be what they are. They have lost theology.

Today, there is no lack of popular books on Catholic theology. Books about Augustine, Aquinas, Newman, and many more are sources of inspiration and renewal to many. We are at a pivotal moment in Church History when, like never before, laypeople and clerics alike should commit anew to ongoing formation in our rich Catholic intellectual and literary heritage. Theology is at the center of all knowledge, informing and forming all other branches of knowledge, just as God in His triune unity reaches out lovingly to man in diverse ways across time and space.