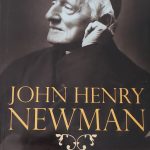 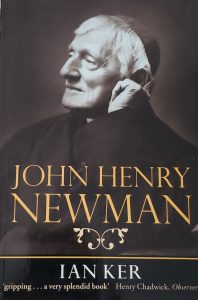 I would like to offer some personal reflections in light of the death of my fellow Archdiocesan Priest, Fr Ian Ker, the world’s leading authority on St John Henry Newman.

My signed copy of Fr Ian Ker’s world-famous book, entitled John Henry Newman A Biography (1988), is especially treasured now. I first read it as I prepared a resource about Newman for Schools to use, ahead of Pope Benedict XVI’s visit to Beatify him, in 2010.  Over a decade later, Fr Ian’s text, by now crammed full of my coloured notelets, spare envelopes and copious pencil underlinings, is a testament to how indispensable his work remains to me.  His preface has constantly influenced my approach to Newman, from the moment I read, what I experienced as Fr Ian’s prophetic words.  He says:

“I have quoted generously from his letters not only for literary reasons…but also because my object has been to write the life of Newman rather than a book about him…I have endeavoured to quote judiciously and selectively, but without compromising my commitment to allowing the reader to hear, as far as possible, the actual sound of Newman’s voice-and also to overhear him thinking aloud, particularly at certain critical junctures. Again, the subtlety of Newman’s highly nuanced approach to complex issues constantly discourages any bland, reductive paraphrasing, in favour of the exact rendering of his own words which alone so often convey the fullness of his thought. There is a vast literature on Newman, spanning several disciplines, which I hope I have taken account of; but I have referred only sparingly to specific secondary sources, when I have a definite debt or disagreement to record.”  (p.ix).

I’ve followed Fr Ian’s valuable hermeneutic, over the last thirteen years, as I savoured, one by one, Newman’s published letters and diaries – focusing on what they reveal specifically about his humanity   What a joy and blessing it has been. I felt a conscious sense of vocation to do this – which was also fostered by a reference Fr Ian made to Newman’s Fragment of the Life of St Philip (1853). In it Newman laments the lack of personal details, about the founder of the Oratorians, with which to apply Ignatian contemplation in order that we might encounter the meaning of Christ’s incarnation more deeply.  This was, Newman said, so that a Saint is not a “bloodless ideality”.   I did not want this to, potentially, happen to Newman either. The letters and diaries, I keep discovering, are full of such information to bring Newman close to us and illustrate that holiness is found in the ordinary as well as the sublime aspects about a person.  In Newman’s case, for example, he learned to play billiards, read Walter Scott and Anthony Trollope novels in bed and liked watching cricket. Just as we might do.

The Fragment also led me to another of Fr Ian’s insights as noted in the book he co-edited with Alan G. Hill, Newman after a Hundred Years (1990). “It is not simply that Newman uses a conversational style in his letters, but he reproduces the actual sound and tone of his speaking voice with all its cadences and stresses.” (p139). This observation made me realise the significance of Newman’s use of colloquial language, home-spun metaphors, proverbial expressions and analogies drawn from popular culture and sport (particularly, boxing!), I was constantly coming across.  Newman clearly used this kind of flexibility of language to great effect, pastorally, to relate to people from every kind of background as an Anglican Vicar in Oxford and a Catholic Priest in Birmingham, and beyond that, those he met on a daily basis.  No wonder so many came to pay their respects by lining the streets at his funeral.

My personal gratitude to Fr Ian particularly comes from his encouragement of my research into Newman’s reflections, about his own grief, and the sensitive support he gave to others who had lost loved ones.  Poignantly, I found that his letters helped me grieve the loss of my own parents too.  Fr Ian had expressed his appreciation of a series of articles of mine, which the Newman Studies Journal had published.  He kindly noted that they reminded him of a number of great Newman passages that he had forgotten about.  I then asked Fr Ian’s advice, as I wanted to write a book called Balm for the Bereaved: Letters from Newman.  I wondered about what he thought.  I, rather self-consciously, mentioned that I hadn’t got a doctorate.  Was that a disadvantage?  Fr Ian’s characteristically forthright reply took me completely by surprise, coming as being both a great compliment to me and a huge challenge at the same time.  He said: “What do you need a PhD for as long as your scholarship is good enough – why does it matter?” I have often drawn strength from his words at our memorable meeting and the delicious local pub lunch which followed it.

On the day Fr Ian passed into the arms of the Redeemer, I received an email which summed up my own feelings exactly.  It said: “We should rejoice that he has done such sterling work for Newman scholarship and in that way brought so many souls closer to God.”  I, as one of them, concur whole-heartedly.

Author of Newman: A Human Harp of Many Chords