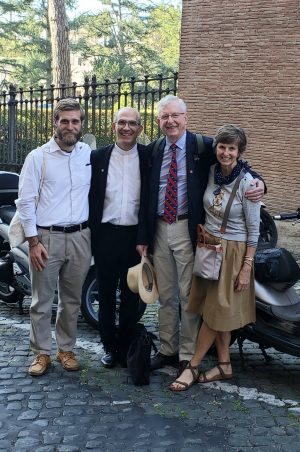 Hello, I’m Dr. Bruce Wyman. On Sunday October 13, 2019, Pope Francis declared Cardinal John Henry Newman a saint along with four others. My wife, Professor Barb Wyman and I were there for this great event. In order to share our experiences, I will ask her a few questions.

(Barb – my impression is that the whole event was incredibly well organized by the Birmingham Oratory and those who helped the Oratory in the planning. From the excellent communication before the event by email, and the clear instructions for collecting the free tickets, along with instructional material in the form of a booklet called “The Pilgrim guide” which had all the events, their locations, etc, in the guide, made for a seamless experience for the whole weekend. The  canonization itself, of course, was the focal point and an unforgettable experience.)

(Barb – I was very fortunate to have been invited as a “VIP” which allowed me to be in “il sagrato” the sacred space very near the altar. I was only a few rows away from Pope Francis, and by chance, sitting with the British Parliament. It was almost hard to believe that I was really there, so close! I tried to remember each moment. The sheer number of vested clergy – cardinals, bishops, and priests – processing in – was breathtaking. And the sacred music added gravitas, even though there was much excitement all around. I had to keep telling myself, “This is really happening!”)

(Barb- we arrived early, but already there were vast crowds finding seats. I was struck, as always, by the universal nature of the church – so many different languages and so many happy people from around the world, all here for the event. People were friendly and as excited as we were. During the Mass, which incorporated several languages, from my place above the general crowd, I was struck by how much louder it got when the Mass parts were in Latin … since that is the official language of the church, all could participate! It was incredibly moving to hear the people “una voce dicentes” – in one voice speaking.)

(Barb – yes! We took a walking tour which took place Sunday afternoon after the canonization, to various places important to Newman – “A Walk through Newman’s Rome.” At each place, there was either someone reading from his writing or poetry, or musical settings of his poetry … four different stops. It was a long walk through the cobblestone streets of Rome lined with beautiful churches. Everyone was convivial and in good spirits. This was another event that made Newman seem more real to me.) 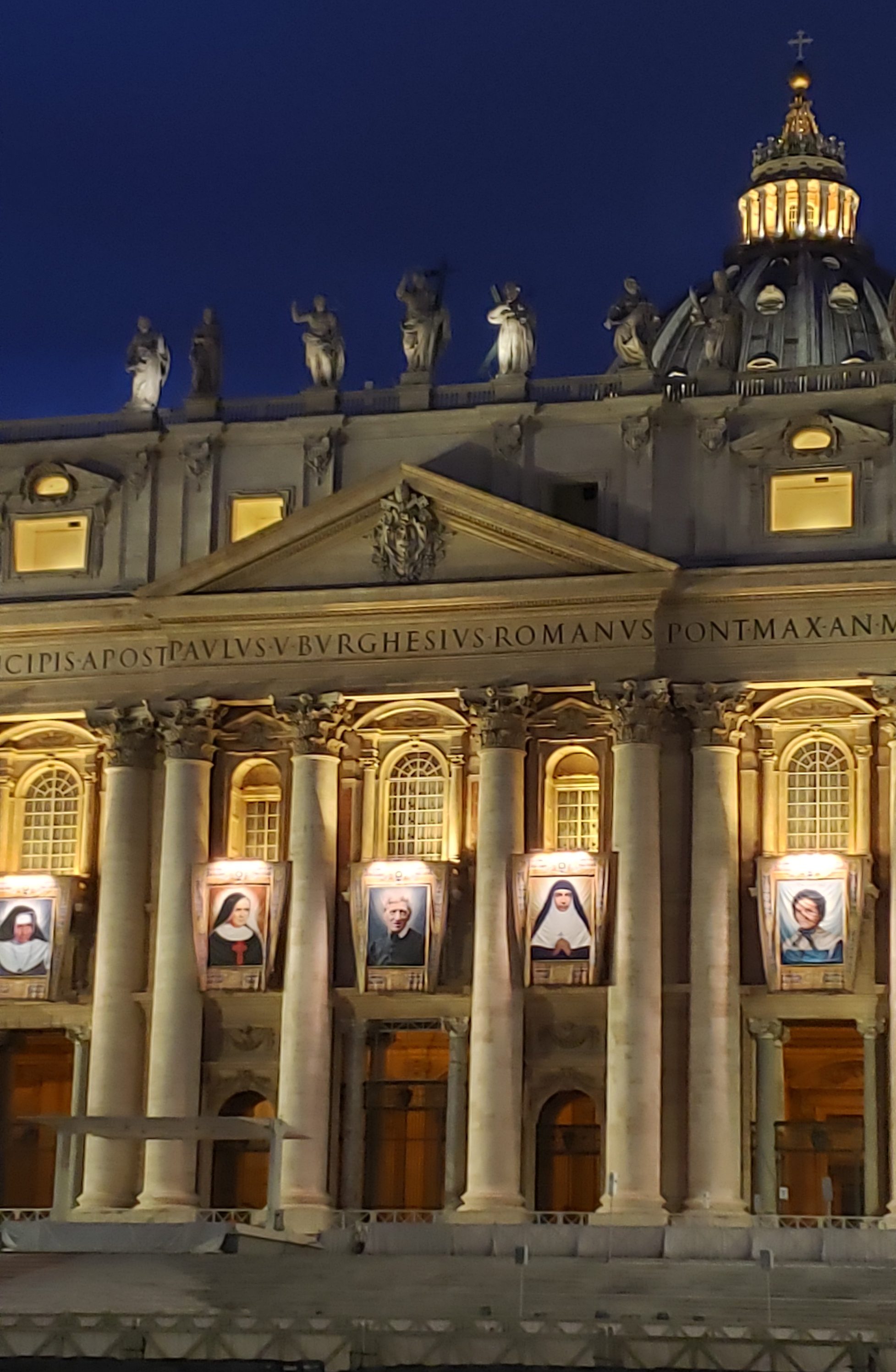 (Barb – I thought his speech was just right. He managed to explain in a few words how Newman was important not just to Catholics, but to Anglicans and the faithful of all nations because of the importance of Newman’s writing and of the person of Newman. The prince delivered the speech with quiet sincerity and this also moved me.)

(Barb – although Newman lived in the 19th C, the problems of modernity that he had to deal with, in the Church and in society, are not that far removed from our current time. He could see with clarity how certain attitudes of thought were destructive. One of these was the mistaken understanding of a religion as something subjective, and the failure to see conscience as the voice of God. But above all else, Newman was in love with Jesus Christ. This is something that transcends all time and unites us with all men of good will throughout the ages. In addition, since we have actual photographs of Newman, as we do of other more recent saints, like St. Therese of Liseaux, it brings a visual reality that is helpful to us. He was a real person, living not that long ago. Saints were real people with real problems, with families and heartaches and joy. This helps Newman speak to us today).

(Barb – I find that being able to see the recipients of Newman’s intercession bringing miraculous cures – and both were present at his canonization – makes it easier to pray to St. John Henry. He is a powerful friend in heaven, and during his life on earth, friendship was important to him. I pray to him as though he were the kindly priest that I know he was, wanting to lead souls to heaven. There’s something about his demeanor, and his gentle eyes, that I find easy to “chat” with, as in a personal conversation with him.)

(Barb – I hope so. So few people, and this includes students who use the Newman centers and people in the communities which have universities, realize that they are named for St. John Henry Newman. This is truly a great loss. Perhaps now students and chaplains both will be curious to look more deeply into this brilliant and affectionate professor priest, who so believed that a university education should enlarge the mind of students and form the soul for Christ, and not just prepare a student to get a job.) The Student workbook of Holiness in a Secular Age, available free of cost at this website could be a good starting point for this.

Thank you for this reflection. St. John Henry Newman, pray for us! 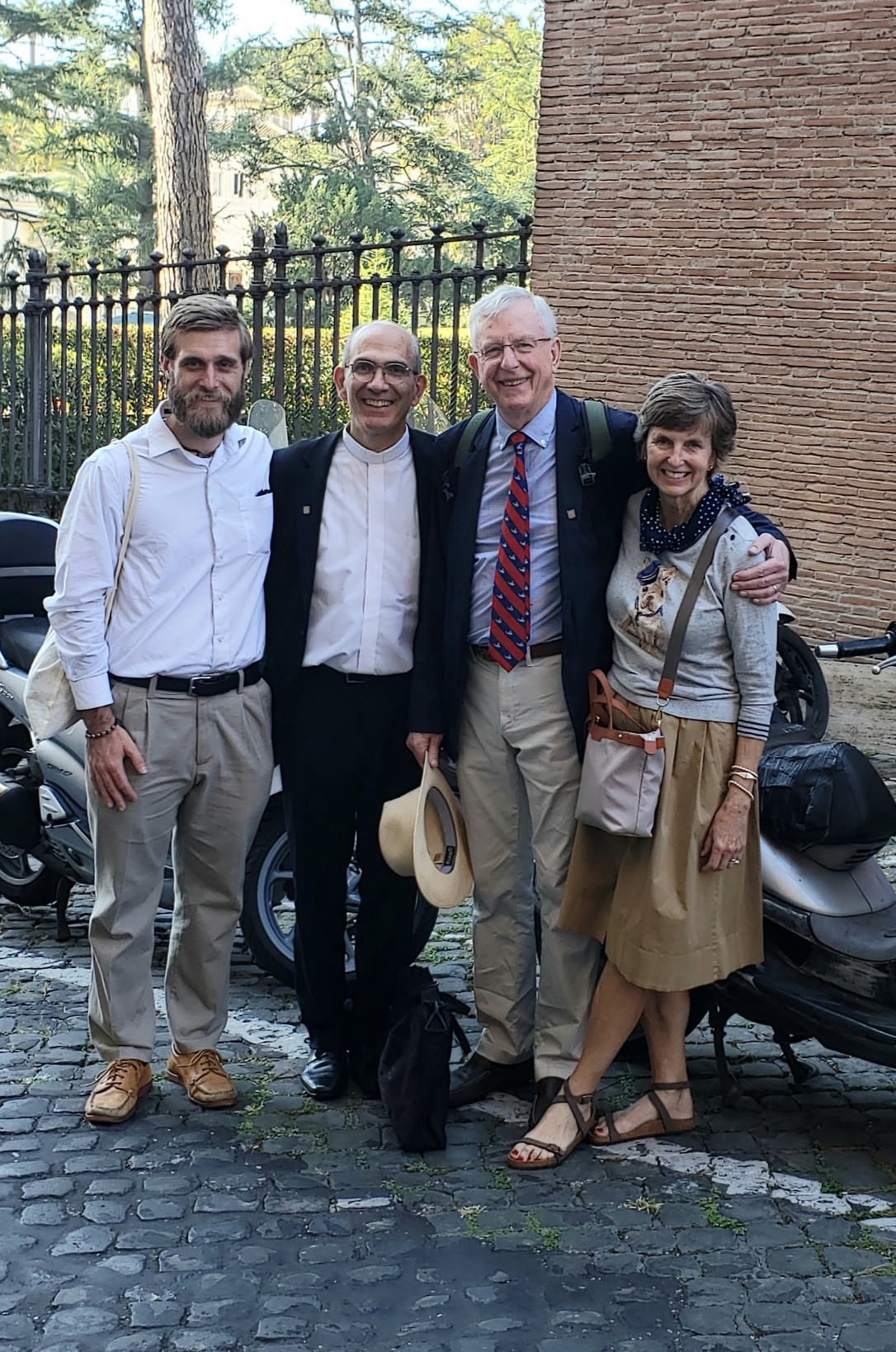