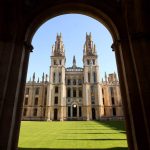 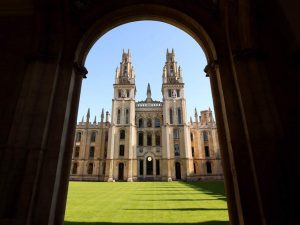 Of the many influential writers of the 19th century, none is better known than Newman’s contemporary, Charles Dickens. Both Newman and Dickens shared concerns about the state of education: Dickens’ novel Hard Times famously presents these concerns through an infamous teacher-figure, Thomas Gradgrind, a machine-minded man who treats teaching like a system and students like cogs. In Chapter 2, titled “Murdering the Innocents,” Gradgrind is introduced thus:

A man of realities. A man of facts and calculations. A man who proceeds upon the principle that two and two are four, and nothing over. With a rule and a pair of scales, and the multiplication table always in his pocket, Sir, ready to weigh and measure any parcel of human nature, and tell you exactly what it comes to. It is a mere question of figures, a case of simple arithmetic. (12)

Gradgrind grinds out graduates, but neglects true human nature. His depressing philosophy is all too familiar: do well in school, go to a good college, major in something lucrative, retire early. Even while running this rat-race, students and teachers cynically sense its inhumanity. Teachers “teach to the test”; state, national, and global standards dictate an ersatz content; and students scheme ways to hack or cheat the system. Where will all this grad-grinding end? What happens when school becomes about achievement for the sake of achievement; what happens when schools forget knowledge for the sake of truth, truth for the sake of wisdom, wisdom for the sake of humans? What happens when education becomes less about human persons, and more about human systems?

While Dickens decries the state of education with satire, John Henry Newman offers hope and wisdom in The Idea of a University (1852). These writings on education, no doubt flowing from his own love and mastery of teaching, provide a foundation for resisting the powerful Gradgrinds of our own day and for embracing an education that truly forms students as human beings, as image-bearers of God, in truth, beauty, and goodness.

[The University] is a place of teaching universal knowledge. This implies that its object is, on the one hand, intellectual, not moral; and, on the other, that it is the diffusion and extension of knowledge rather than the advancement. If its object were scientific and philosophical discovery, I do not see why a University should have students; if religious training, I do not see how it can be the seat of literature and science. (3)

The nature, or essence, of a University is to teach, diffuse, and extend universal knowledge—knowledge that is discoverable and applicable to all men everywhere and at all times. The word itself—uni–verse—literally means “one-turn,” evoking the image of a single point or center on which all other things turn. If a student learns universal knowledge well, that student is prepared to learn and practice any other discipline for the rest of his or her life; the student has learned first principles, absolute truth. According to the Roman poet Virgil, such a student is happy, or blessed: Felix qui potuit rerum cognoscere causas [Happy the man who knows the causes of things] (Georgics Bk. 2 l. 490). Therefore, Newman qualifies that the essence of a University is not merely to advance knowledge, lest the University merely become a slavish place whose object is based only on research goals. If “advancement” of knowledge were the aim, Newman does not see how it could actually have students; the student would instead be one of Gradgrind’s cogs. Rather, the aim is to extend to students a foundation in universal knowledge. And, such a foundation is in harmony with human nature; created as bearers of God’s image, reflecting his Divine Reason, his Logos, humans are called to know God and to know his creation. Thus, forming students in universal knowledge is essential to Newman’s idea of a University.

In the next post, we will consider Newman’s second fundamental principle and his vision of a successful University graduate. These preliminary considerations will form the groundwork for unpacking his remaining Discourses on a University.