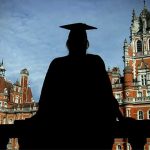 In two previous posts, we have evaluated John Henry Newman’s two foundational principles for his Idea of a University as expressed in the “Preface.” Now, let us turn our attention to the end result, the final fruit: Newman’s sketch of what a real graduate of such a real University looks like. As any good horticulturist knows, the best fruit is grown from trees given the best soil and nutrients, and given the best supporting trellises. The University pupil is the fruit; born on the tree of the University, guided by the trellis of the Church. To understand the fruit fully, it is important to know how it is grown–so, if you have not yet done so, take a moment to read the previous two posts in order to fully grasp Newman’s vision of a University graduate.

Today, one would be hard-pressed to find a school that does not promise exciting and compelling things as a result of attending its institution. In fact, most schools today exist in a competitive market, vying for parent, student, and government dollars, all of them promising a highly sought-after product: vital career, sharpened skills, and increased life possibilities. Indeed, marketing, media, and consumerism have had an immense impact on education today. However, one must, to a certain extent, put aside these various cultural pressures related to scholastic outcomes in order to grasp Newman’s vision of how a University forms a human being–how an individual subject enters an institution with all the meekness of a sapling and, through the formative process of learning, grows into a well-watered tree that bears fruit in due season. The promises made by schools today are often mechanistic–a program or a system claims to offer some kind of guaranteed spot in the workforce or in higher academia. While career and educational progress are a natural end of University education, they are precisely a natural end to what is a deeper and more complex process of growth than what assembly-line schools assume.

According to Newman, a University education results in “the real cultivation of mind.” [In his book on the Roman poet Virgil, Virgil, Father of the West, German scholar Theodor Haecker reminds us that this word cultivation, which comes from culture, is a word borrowed from the farming industry (48-49)]. A University engages in a similar kind of agricultural work. There is serious and hard labor involved; this includes not just brute work, but rational awareness: being in tune with the weather, the seasons, the needs of the crops. It requires being in tune with nature. Just so, education–the project of cultivating a “culture of the intellect”–must be in tune with true human nature, and must be aware of the true forces of human growth in order to know what labor should be involved and at what times. But it also requires the grace of being able to step back and know that the fruit itself will grow of its own accord, given the right conditions. The fruit cannot be forced–the pupil must be allowed to blossom, given the right circumstances.

Knowing the agricultural roots of the word for cultivation and culture helps us see that the essence of a “liberal education” is to “bring the mind into form” (7). A liberal education, in the form of its cultivated pupils, “… does manifest itself in a courtesy, propriety, and polish of word and action, which is beautiful in itself, and acceptable to others” (7-8). Newman describes the successful pupil as having acquired “good sense, sobriety of thought, reasonableness, candor, self-command, steadiness of view … power of influencing others, and sagacity,” which all culminates in “… a faculty of entering with comparative ease into any subject of thought, and of taking up with aptitude any science of profession” (8-9).

The well-cultivated mind possesses the power to learn anything it turns itself to. This is the true fruit of a liberal arts education, what some today are calling a classical education, or a classical Catholic education. Further, this entails a maturation and transformation into a person of sense and manners–a person who does not merely know things, but knows how to apply those things, and knows how to apply those things in eloquent, compelling and beautiful ways. Thus, the end of a University education is the total integration of knowledge into the heart, mind, and soul of a well-cultivated person.

Thus, a true graduate of a true University becomes a blessing to society in whatever he or she does. The well-formed student, by mere personal presence, leavens the world with truth and charity, and can engage in any intellectual or practical enterprise. He is not a “mere hereditary Christian,” who does nothing because he does not realize the grandeur of the truths he holds; but he is also not an “infidel, fanatic, or heresiarch” who does much, and does much energetically, for the sake of an erroneous, albeit consistent, view (9). Newman’s star pupils are those who energetically and consistently do much for the sake of truth. Given accuracy of true knowledge, and given the moral, theological, and philosophical guidance of the Church, the fruit of a University is a well-matured human person, fully alive to God, the self, the world and others, fully cultivated in mind, heart, and will.

In essence, Newman’s University is a place for teaching universal knowledge. In practice, Newman’s University must also be assisted and informed by the Church, whose possession of Revealed Truth and authoritative love for her children grants her the duty and right to undergird the human enterprise of seeking universal knowledge. And the natural result is the propagation of well-matured human persons who, truly cut from the cloth of their cultural setting, nonetheless are instructed in universal knowledge and honed into natural and spiritual blessings. Based on these principles, Newman gave a series of lectures upon the founding of the Catholic University of Ireland, which is now called University College, Dublin. Newman’s personal interest in and experiment with quality University education not only flowered into a real University, but also left us with a record of his thinking in the form of the lectures, or discourses, that make up his book The Idea of a University.  Forthcoming posts will look at The Idea of a University, Discourse by Discourse, unpacking Newman’s insights that are, indeed, universal in their wisdom and potency, and desperately needed for our own times.