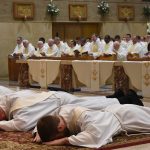 Is a Celibate Clergy Possible?

In the 19th century St. John Henry Newman replied to English Protestants who argued  that celibacy was only possible for a few exceptional men. In his response, Newman explained that the Catholic Church selects men, trains them for years, but recognizes that some cannot go forward. Then at last, when a priest is called to ministry, he receives abundant graces from God to live a celibate life.

Newman goes to the heart of the matter:

“When, then, we come to the matter of fact, whether celibacy has been and is, in comparison of the marriage vow, so dangerous to a clerical body, I answer that I am very sceptical indeed that in matter of fact a married clergy is adorned, in any special and singular way, with the grace of purity; and this is just the very thing which Protestants take for granted. What is the use of speaking against our discipline, till they have proved their own to be better? Now I deny that they succeed with their rule of matrimony, better than we do with our rule of celibacy.”

For Newman the public accounts of people’s lives indicate that:

“ … a Protestant rector or a dissenting preacher is not necessarily kept from the sins I am speaking of, because he happens to be married: and when he offends, whether in a grave way or less seriously, still in all cases he has by matrimony but exchanged a bad sin for a worse, and has become {135} an adulterer instead of being a seducer. Matrimony only does this for him, that his purity is at once less protected and less suspected.”

St. John Henry acknowledged that there are many good, correct, and reverent Protestant ministers:

“ … but still allowing all this, the terrible instances of human frailty of which one reads and hears in the Protestant clergy, are quite enough to show that the married state is no sort of testimonial for moral correctness, no safeguard whether against scandalous offences, or (much less) against minor forms of the same general sin. Purity is not a virtue which comes merely as a matter of course to the married any more than to the single …”

Newman goes as far as to say:

“ … My deliberate conviction that there are, to say the least, as many offences against the marriage vow among Protestant ministers, as there are against the vow of celibacy among Catholic priests. I may go very much further than this in my own view of the matter, and think, as I do, that the priest’s vow is generally the occasion of virtues which a married clergy does not contemplate even in idea.

Newman had identified the problem: “It is the world, the flesh, and the devil, not celibacy, which is the ruin of those who fall.” He told English Protestants to look at the evils in their married clergy before condemning Catholic priests.

The new English saint thus warns of the false reasoning echoed so often today: that a married clergy would not only solve the problem of sexual sins but also the shortage of clergy. He replied to the question regarding the possibility of a celibate clergy with a clear yes.

The free response to God’s call to celibacy is no more difficult for the men of today than for those of the past. St. John Henry Newman and many other saints invite us to see celibacy as a divine calling and gift which demands the exercise of virtues in response to God’s grace.