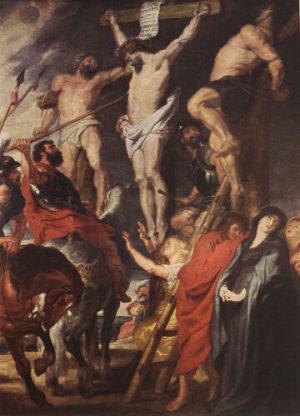 Begin again.  These are our Lord’s words for us, especially as Lent draws us closer to its end, when perhaps we have failed to keep the resolutions we so earnestly pledged to keep.  In a meditation for Good Friday, Blessed Newman explains how God has not only offered us a new beginning, He entered into it.

After we had fallen into sin, by “His holy Prophet Isaias, [God] announced before He came, ‘Behold I create new heavens and a new earth’ (Isaias lxv. 17).”   This God announced, but that He himself would be the new creation, that “He who made Adam in the beginning resolved in His mercy to make a new Adam, and by a further ineffable condescension determined that that new Adam should be Himself,” this no man could foretell.

That God should become this new Adam, Newman reveals, was confirmed in Christ’s very passion: “The Creator came as if He were a creature, because He took upon Him a created nature—and as, at the first, Eve was formed out of the side of Adam, so now, when He hung on the cross, though not a bone of Him was broken, his side was

pierced, and out of it came the grace, represented by the blood and the water, out of which His bride and spouse, His Holy Church, was made.”

As Jesus is the beginning of this creation, he is also its source, for “all the sanctity of all portions of that Holy Church is derived from Him as a beginning; and He feeds us with His Divine Flesh in the Holy Eucharist, in order to spread within us, in the hearts of all of us, the blessed leaven of the New Creation.”  St. Paul says of Jesus, “He is before all things, and in Him all things hold together (Col. i. 17).”  When we look to His Church, we see these lines from Scripture shine in the light of reality, for “All the wisdom of the Doctors, and the courage and endurance of the Martyrs, and the purity of Virgins, and the zeal of Preachers, and the humility and mortification of religious men, is from Him, as the beginning of the new and heavenly creation of God,” Newman proclaims.

Blessed Newman closes his meditation with a prayer for “all ranks and conditions of men in Thy Holy Church” including bishops, priests, pastors, religious bodies, fathers, husbands, wives, children, the aged, young people, and even business men and women, for every one of these vocations

“have sprung from Thee and live in Thy Life.”  Having begun in Him, we desire to stay in Him, and so Newman prays for “all of us the necessary graces of faith, hope, charity, and contrition.”

This last one – contrition – stands out to us now.  We turn to our Lord and wonder if we can return and begin again.  Here the words of St. Josemaria Escriva should guide us back: “You strayed from the way and did not return because you were ashamed.  It would be more logical if you were ashamed not to return.”