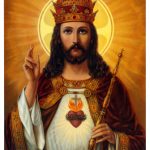 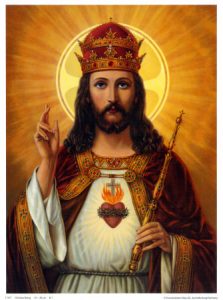 Jesus is frequently described and depicted as a kind and gentle man; although true, this representation is incomplete. Jesus is strong. Jesus is just, and he is demanding. He is God in the flesh. Our Savior is Lord of Lords and Captain of God’s army as it does battle with spiritual weapons against evil in the world.

“I saw and behold a white horse, and He that sat on him had a bow, and there was a crown given Him; and He went forth conquering that He might conquer” (Apoc. vi. 2). And again, “I saw heaven opened, and behold a white horse, and He that sat upon him was called Faithful and True, and with justice doth He judge and fight” (Apoc. xix. 11) … “And he was clothed with a garment, sprinkled with blood, and His Name is called, The Word of God. And the armies that are in heaven followed Him on white horses, clothed in fine linen, white and clean” (verse 13).

Newman explains: “Such is the Captain of the Lord’s Host, and such are His soldiers. He and they ride on white horses, which means, that their cause is innocent, and upright and pure. Warriors of this world wage unjust wars, but our Almighty Leader fights for a heavenly cause and with heavenly weapons—and in like manner His soldiers fight the good fight of faith; they fight against their and their Master’s three great enemies, the World, the Flesh, and the Devil.”

We may not like this imagery but it is nonetheless true. Jesus shed his blood for our redemption and we his followers have been cleansed by his blood. In the words of the Apocalypse,

“they have washed their robes, and have made them white in the blood of the Lamb” (Apoc. vii. 14). And again he and they are certain of victory because it is said, “He went forth conquering that He might conquer” (Apoc. vi. 2).

Newman invites us to pray to Jesus, our captain in the fight, for missionaries that they may have the necessary courage and strength for their mission, and that they may be sustained in their sufferings.

He also bids us to pray to Jesus for all Christians in the following words:

“… instruct them how to speak and how to act every hour of the day, so as to preserve their own souls from evil and to do good to their companions and associates. Teach us, one and all, to live in thy presence and to see Thee, our Great Leader and Thy Cross—and thus to fight valiantly and to overcome, that at the last we may sit down with Thee in Thy Throne, as Thou also hast overcome and art set down with Thy Father in His Throne.”

We must examine ourselves. Do we pray to the Holy Spirit for the gift of fortitude? Do we fight against temptations confident that Christ has shed his blood for us? For, if we imitate Christ and conquer in our battles, we will be called sons of God and sit with him in his kingdom.