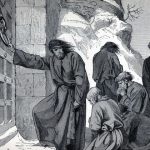 St. John Henry Newman teaches that the duty of Christians is to accept filial correction, not to shrink from it. In the sermon, Rebuking Sin, however, Newman is concerned with the opposite excess: a presumptuous or imprudent correction. This sermon is frighteningly relevant. Today’s expanded use of mass-media communication has multiplied those who take upon themselves what Newman calls the office of “Reprover” or “Censor,” moral policemen who are too quick to point out the flaws of others.

The occasion of this sermon was the Feast of the Nativity of John the Baptist, but Newman, instead, focused on the cause of his martyrdom. St. John’s task was to “rebuke a king,” to tell Herod the Tetrarch he was wrong to have “taken his brother’s wife” (Mark 6.18). Rather than propose St. John the Baptist as an ideal model, Newman emphasizes that one should not take this role upon himself lightly. He then establishes proper criteria for filial correction. For one to effectively “rebuke vice boldly” requires personal holiness, as a duty to do so given by competent authority. Furthermore, it requires tact, prudence, and love in order to rebuke well.

How does one rebuke well?  It requires “a maturity and consistency of principle seen and acknowledged.” It is the “necessary result” of possessing such an office, since such a call involves having a “weight of character” from which the reproof can be effectively exercised. Lacking moral character will result in “false shame, timidity, undue delicacy,” and a failure to be “prompt and collected in withstanding evil.”

A rebuker must himself stand habitually under the “law of Christ” and be truly healed of his own sins by grace. Practically, this means being “cheerful, honest,” rebuking faults in a natural way because the rebuker views “all things in a plain and candid light … calling them by their right names.” This starts within ourselves, being frank and candid in the confessional.

Thus, the person regenerated in holiness will not  “[keep] notions of right and wrong to himself, nor, on some conceit that the world is too bad to be taught the Truth, suffer it to sin in word or deed without rebuke.” One who lives in the light will prudently and lovingly call others into that light. When done properly, Newman notes how the “single-hearted Christian will find fault, not austerely or gloomily, but in love; not stiffly, but naturally, gently, and as a matter of course, just as he would tell his friend of some obstacle in his path which was likely to throw him down, but without any absurd feeling of superiority over him, because he was able to do so.” The end goal is not highlighting the sin, but is to point out a better way out of sin into righteousness. Failing to do so in love can not only be offensive, but can develop “a spirit of self-complacency.” Strikingly, Newman thinks that these sorts of “self-appointed censors of vice are not to be countenanced or tolerated by any serious Christian.”

Newman thinks the formal “office of a censor” flows naturally from duty, from adherence to some authority outside of oneself that authorizes an act of filial correction. Newman is chiefly concerned with the problem of “self-appointed rebukers” who take the burden upon themselves of pointing out others’ flaws “on their own authority,” and tend to do so in a public way, rather than in private conversation. Electing oneself as a moral policeman may stem from deeper sins of pride and vanity. It can be the case that those whose duty it is to point out sins have failed to do so; but the “self-appointed censors of vice,” noticing this failure, then inappropriately “flatter themselves with the notion that they are energetic champions of virtue, strenuous and useful guardians of public morals or popular rights.” This degenerates from authentic filial correction into public shaming and inflated self-righteousness. Authentic filial correction is a “divine commission,” and it is a sin to undertake it “without a call.”

Finally, how  one goes about issuing reproof for sin must itself be holy. The one who is called to rebuke sin must be pure, to “keep from sin themselves in all things,” and to know that giving reproof often brings suffering. St. John the Baptist was, after all, beheaded. One must have counted the cost, must actively and intentionally know what is his duty, and must perform his real duty of reproving sin without concern for the outcome, like the prophet Jeremiah whose prophecies were not well received, but who nevertheless performed his duty in keeping with God’s call. A reprover must put aside his “preferences and partialities” and perform his function with respect, love, personal character, and out of his own “ripeness in Christian holiness.” St. Paul says we are but crashing cymbals if we have not love in any endeavor, natural or spiritual; St. John Henry Newman says our rebukes of sin are fruitless if we have not the “ripeness of Christian holiness.”

While many are becoming increasingly vindictive and vitriolic about important moral questions, both online and in-person, having taken up the self-appointed offices of censor, reprover, moral policeman, Christians must be those who are neither silent nor shaming, neither apathetic nor over-zealous, but who use delicacy, prudence and rebuke “seasonably” out of an objective duty or call. Christians have a duty to shape the culture for the good; when this involves rebuking sin, it must be done “at the right time, in a right spirit, and a right manner.” Perhaps this means taking steps to more actively discern our role in the world as lay people or religious, going on retreat or frequenting more daily masses. Perhaps it means delving into deeper study on a theological or cultural topic in order to speak intelligently to an important issue being discussed in the workplace or family. Above all, we must be first conformed to the will of God in prayer, from which our thoughts, words, and deeds must flow.

Not all of us are Jeremiahs or Baptists; while we may have a duty to do or say certain things, it must start with an accurate and sanctified perception of the persons we are called to be.