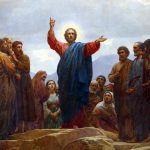 Last week we were reminded that we should always wonder at the glorious surprise, so to speak, of God’s miraculous work in and with human history. After giving a sermon on the “Kingdom of Saints” on Monday of Pentecost Week, some time between 1835 and 1836, the very next day St. John Henry Newman gave a sermon on the same topic and the same verse, Daniel 2.25: “The stone that smote the Image became a great Mountain, and filled the whole earth.” Just as Christ was a stone, rejected by the builders, who became the cornerstone, so the Church, the small pebble beside the mightiest of the earth’s kingdoms–Babylon, Assyria, Persia, Greece, and Rome–has grown into a mighty mountain, a civilization spanning space and time, earth and heaven. Newman says the Kingdom of God in his Church is still unfolding, and suggests we should not quail at strife and hardship in the life of the Church: they are the growing pains unto eternal life.

The “singular phenomenon” of the Church began on the foundation of “Peter and the other Apostles,” whom he left as his “Viceregents … after his departure.” Further, he announced the “indefinite extension” and “unlimited duration” of the Church. Newman comments on how the Church, under the “government” of Christ, is the “very dynasty which his Apostles began,” an Empire of Love wherein Christ promises he is with us “to the very end of the age” (Matthew 28:20). A century later, St. Paul VI’s would speak of the building of a civilization of love.

Newman’s brilliant historical imagination is quick to see the implications for the whole of the human drama, from ancient history to modern times. He comments that the idea of a “new Empire of the world … destined to issue [forth]” was a common ancient notion growing in pagan and Jewish minds in the four centuries prior to Christ. This “rumor” of a new Kingdom to come is found by Newman, and many early Church Fathers, even in the first century B.C. Roman poetry of Virgil. Virgil predicts a new age of “Justice” ushered in by a divine and human “baby,” a “boy’s birth in whom / The iron shall cease, the golden race arise,” who will do away with “wickedness,” freeing the “earth from never-ceasing fear.” This era of a “world at peace” would come from this new baby boy receiving “the life of gods.” This was written sometime between 42 and 38 B.C., just before the birth of Christ; it is difficult to not agree with Newman, that even the pagans caught wind of the “rumor” of the coming of the Kingdom of God, however they may have misunderstood it. Newman sees evidence for this in the “Eastern Sages,” the non-Jewish wise men coming from the East to visit the baby Jesus, and in the writings of Moses, “another Eastern sage, fourteen hundred years before,” who wrote in Genesis 49:10 about a “Star” from Jacob, a “Sceptre” rising out of Israel, of one who would have “Dominion.”

But Newman wants to make sure we see that, just as Christ says he brought “not peace but a sword,” (Matt, 10:34), that the coming of this Kingdom would involve strife, sorrow, division, and pain until its fulfillment in Christ’s second coming, the end of history. Christ’s promises are not as glittering and glamorous as Virgil’s; noting prophecies in the Psalms and Isaiah, Newman says the “prediction of bloody revolution and of peace are as strangely combined, as in our Lord’s account of His Kingdom, as being at once a refuge and consolation, and a sword.” He says this is an utterly unique kind of prophecy compared to pagan histories, with no “resemblance … in the annals of other kingdoms.” The Kingdom of God is unique in this sense, too: it is realistic about human suffering and the drama of sin, not idealistic about political perfection.

While he was not yet a Catholic when he delivered this sermon, Newman goes on to cite the Middle Ages as, like the period of Kings in the Jewish nation, a time when the work of God and his Kingdom did not cease, but was obscured by human sin and blunder. Newman makes it clear that his point is not necessarily to praise or censure the “Papacy”; his point is to “show that it is possible for certain events to be in some sort a fulfillment of prophecy, without considering every part of them, the manner of their accomplishments, the circumstances the instruments, and the like to be approved by God.” God’s promises remain true even if humans within the Church do not. The Church as a fulfillment of prophecy, in this life, is a mixed history; it is a dramatic story of God’s fidelity and man’s choice for or against that fidelity.

Thus, confronted with sin within the Church’s bounds, we can still see “in the present feebleness and blindness of the Church, the tokens of His righteous judgments upon us.…” He will at length, even yet, though doubtless in a way which we cannot understand, “establish and make Jerusalem a praise in the earth.” These words should comfort us as our faith is assailed from within and without the Church; we should never let it diminish our resolve and action to love God and neighbor, to remain faithful to God’s promises, since he is ever faithful, from the dawn of history to the coming of Christ to the present age.

We don’t need to be serious historians like Newman to see this or know this. We need to be faithful. Let us put into action the faith that we profess. Our fervent prayers at frequent Masses, our truly contrite confessions, our smallest acts of kindness and charity to a person in need, are more real, and of more eternal weight, than any of the distractions or temptations that assail us. Making the firm resolve to not sin, to accept crosses and trials humbly, to live a life of forgiveness, and to make greater strides of love, are all in Christ spiritual acts that place us within the grand history Newman delineates. They make us real subjects in the real Kingdom that is still spreading and growing; they make our bodies and souls the very fulfillment of the ancient prophecies and promises of God’s loving union with mankind. They make us, as Newman echoes in so many of his writings, above all obedient to the voice of our Shepherd. In this way we continue to build the Kingdom of God with Christ, even in the midst of social and political unrest, ideologies that seek to erase Christianity, war, or pandemic. St. John Henry Newman assures as that these trials are prophetic proofs of, not proofs against, the growth of God’s Kingdom.