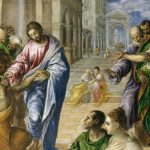 Mark Twain once wrote, “When we remember we are all mad, the mysteries disappear and life stands explained.” We do live as though life—hurtling through space on a giant spinning rock, having one nose and two ears and falling in love—is normal. Even as Christians we forget the amazing story we are part of, and “story” is too juvenile a word for “life.” We love epic stories because they remind us, even if we remain unaware, of who we are and what we are about. Watching “Lord of Rings” on our televisions, when it is only a poor shadow (yet one of our best) of life, seems both silly and good at the same time.

St. John Henry Newman points out in his sermon, “The Kingdom of the Saints I,” that we think of history in the same way we think of our lives. But if we read the Scriptures closely, we will see the supernatural unfolding of events prophesied far before their time and be even more convinced of the Gospel’s veracity. 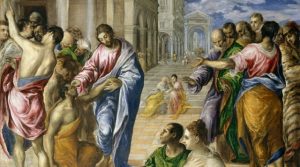 The little prophecy that says a lot is from Daniel 2:35: “ … then the iron, the clay, the bronze, the silver, and the gold, all together were broken in pieces, and became like the chaff of the summer threshing floors; and the wind carried them away, so that not a trace of them could be found. But the stone that struck the image became a great mountain and filled the whole earth.” This is Daniel retelling Nebuchadnezzar’s dream to him. Then Daniel explains how the iron, clay, bronze, silver and gold are all kingdoms which will be destroyed by one kingdom that will endure forever. Newman says we know now that kingdom is Christ’s, but how surprisingly it smote all the other kingdoms!

Christ’s conquest was nothing like man’s. While empires violently crushed one another, the Gospel grew and spread almost invisibly, through weak agents who were told they would never accomplish anything. “Suddenly in every part of this well-cemented Empire, in the East and West, North and South, as if by some general understanding, yet without any sufficient system of correspondence or centre of influence, ten thousand orderly societies, professing one and the same doctrine, and disciplined upon the same polity, sprang up as from the earth.” Christianity went from twelve Jewish men and their followers submitting to persecution one moment to the next moment, overcoming the Roman Empire, all without spilling blood. All the empires of its day are gone, but Christianity remains. Imagine, Newman says, “Throughout the kingdoms and provinces of Rome, while all things looked as usual, the sun rising and setting, the seasons continuing, men’s passions swaying them as from the beginning, their thoughts set on their worldly business, on their gain or their pleasures, on their ambitious prospects and quarrels, warrior measuring his strength with warrior, politicians plotting, and kings banqueting, suddenly this portent came as a snare upon the whole earth.”

Perhaps just as remarkable, Newman says, is the fact that our Lord and St. Paul refer to these coming events not just with confidence and joy, but with some sadness—for the many who would reject Christ’s reign and “ … foreboding those miserable corruptions in the Church, which all Christians allow to have since taken place, though they may differ in their account of them. ‘Because iniquity shall abound, the love of many shall wax cold.… There shall arise false Christs and false prophets, and shall show great signs and wonders; insomuch that, if it were possible, they shall deceive the very elect.’”

None of this history is normal. It’s a miracle God has wrought, and how clearly we can see it from this point in history if our eyes are open. What God is doing in and through our lives is no less miraculous and is part of the one and same story. Each day, as we speak with our Lord, let’s ask him what part we have to play and how we can make ourselves more available to him. And let’s pray for the grace to see clearly and help others see clearly how the Kingdom of God is in our midst.