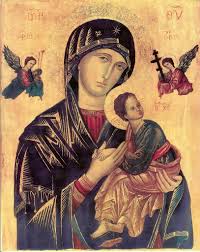 The People of God have always called on the Virgin Mary, Help of Christians, with filial trust. Blessed John Henry Newman, who was a keen student of history, enumerates five special events in history during which Christians fervently sought the aid of the Mother of God and for which various Popes spread devotion to her under the advocation Auxilium Christianorum.

May 29
Mary is the “Auxilium Christianorum,” the Help of Christians

OUR glorious Queen, since her Assumption on high, has been the minister of numberless services to the elect people of God upon earth, and to His Holy Church. This title of “Help of Christians” relates to those services of which the Divine Office, while recording and referring to the occasion on which it was given her, recounts five, connecting them more or less with the Rosary.

The first was on the first institution of the Devotion of the Rosary by St. Dominic, when, with the aid of the Blessed Virgin, he succeeded in arresting and overthrowing the formidable heresy of the Albigenses in the South of France.

The second was the great victory gained by the Christian fleet over the powerful Turkish Sultan, in answer to the intercession of Pope St. Pius V, and the prayers of the Associations of the Rosary all over the Christian world; in lasting memory of which wonderful mercy Pope Pius introduced her title “Auxilium Christianorum” into her Litany; and Pope Gregory XIII, who followed him, dedicated the first Sunday in October, the day of the victory, to Our Lady of the Rosary.

The third was, in the words of the Divine Office, “the glorious victory won at Vienna, under the guardianship of the Blessed Virgin, over the most savage Sultan of the Turks, who was trampling on the necks of the Christians; in perpetual memory of which benefit Pope Innocent XI. dedicated the Sunday in the Octave of her Nativity as the feast of her august Name.”

The fourth instance of her aid was the victory over the innumerable force of the same Turks in Hungary on the Feast of St. Mary ad Nives, in answer to the solemn supplication of the Confraternities of the Rosary; on occasion of which Popes Clement XI and Benedict XIII gave fresh honour and privilege to the Devotion of the Rosary.

And the fifth was her restoration of the Pope’s temporal power, at the beginning of this century, after Napoleon the First, Emperor of the French, had taken it from the Holy See; on which occasion Pope Pius VII set apart May 24, the day of this mercy, as the Feast of the Help of Christians, for a perpetual thanksgiving.