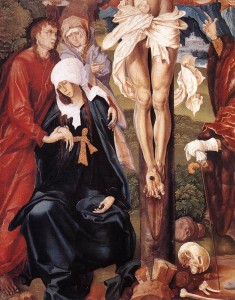 The title Most Devout Virgin tells us about Mary’s dedication to Jesus. To convey the meaning of devotion, Blessed John Henry Newman puts before us the example of a devoted wife or daughter, and next of St. Paul’s “intense devotion towards our Lord.” He then goes on to explain how Mary’s devotion was greater because she was his mother and had the long intimacy of thirty years with him, “and because she was from her special sanctity so ineffably near to Him in spirit.” At last she felt his every suffering and affliction.

Most Devout Virgin, prays for us that our devotion for Jesus may grow in purity and ardor.

May 18
Mary is the “Vas Insigne Devotionis,” The Most Devout Virgin

TO be devout is to be devoted. We know what is meant by a devoted wife or daughter. It is one whose thoughts centre in the person so deeply loved, so tenderly cherished. She follows him about with her eyes; she is ever seeking some means of serving him; and, if her services are very small in their character, that only shows how intimate they are, and how incessant. And especially if the object of her love be weak, or in pain, or near to die, still more intensely does she live in his life, and know nothing but him.

This intense devotion towards our Lord, forgetting self in love for Him, is instanced in St. Paul, who says. “I know nothing but Jesus Christ and Him crucified.” And again, “I live, [yet] now not I, but Christ liveth in me; and [the life] that I now live in the flesh, I live in the faith of the Son of God, who loved me, and delivered Himself for me.”

But great as was St. Paul’s devotion to our Lord, much greater was that of the Blessed Virgin; because she was His Mother, and because she had Him and all His sufferings actually before her eyes, and because she had the long intimacy of thirty years with Him, and because she was from her special sanctity so ineffably near to Him in spirit. When, then, He was mocked, bruised, scourged, and nailed to the Cross, she felt as keenly as if every indignity and torture inflicted on Him was struck at herself. She could have cried out in agony at every pang of His.

This is called her compassion, or her suffering with her Son, and it arose from this that she was the “Vas insigne devotionis.”