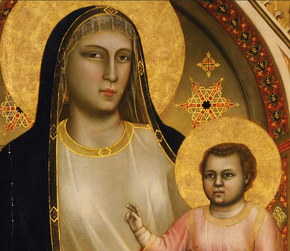 Mother of Christ is another of the titles given to the Virgin Mary. Blessed John Henry Newman explains the special meaning of this title. Where as Mother of the Creator emphasized the unity of the divine and human nature in Christ, Mother of Christ focuses on the promise of a Messiah to the Jews and the fulfilment of the promise. At the time of the fall of Adam God promised that the seed of the Woman would bruise the Serpent’s head.

The Virgin Mary was chosen by God for the high and singular honor of being the Mother of the Messiah, an honor which out of humility she had not sought. Newman writes: “She had been inspired to choose that better way of serving God which had not been made known to the Jews—the state of Virginity.” And “Thus was it that she became the Mother of the Christ, not in that way which pious women for so many ages had expected Him, but, declining the grace of such maternity, she gained it by means of a higher grace.”

Holy Mother of Christ, we venerate you ever virgin and ever mother.

May 15
Mary is the “Mater Christi,” the Mother of Christ

EACH of the titles of Mary has its own special meaning and drift, and may be made the subject of a distinct meditation. She is invoked by us as the Mother of Christ. What is the force of thus addressing her? It is to bring before us that she it is whom from the first was prophesied of, and associated with the hopes and prayers of all holy men, of all true worshippers of God, of all who “looked for the redemption of Israel” in every age before that redemption came.

Our Lord was called the Christ, or the Messias, by the Jewish prophets and the Jewish people. The two words Christ and Messias mean the same. They mean in English the “Anointed.” In the old time there were three great ministries or offices by means of which God spoke to His chosen people, the Israelites, or, as they were afterward called, the Jews, viz., that of Priest, that of King, and that of Prophet. Those who were chosen by God for one or other of these offices were solemnly anointed with oil—oil signifying the grace of God, which was given to them for the due performance of their high duties. But our Lord was all three, a Priest, a Prophet, and a King—a Priest, because He offered Himself as a sacrifice for our sins; a Prophet, because He revealed to us the Holy Law of God; and a King, because He rules over us. Thus He is the one true Christ.

It was in expectation of this great Messias that the chosen people, the Jews, or Israelites, or Hebrews (for these are different names for the same people), looked out from age to age. He was to come to set all things right. And next to this great question which occupied their minds, namely, When was He to come, was the question, Who was to be His Mother? It had been told them from the first, not that He should come from heaven, but that He should be born of a Woman. At the time of the fall of Adam, God had said that the seed of the Woman should bruise the Serpent’s head. Who, then, was to be that Woman thus significantly pointed out to the fallen race of Adam? At the end of many centuries, it was further revealed to the Jews that the great Messias, or Christ, the seed of the Woman, should be born of their race, and of one particular tribe of the twelve tribes into which that race was divided. From that time every woman of that tribe hoped to have the great privilege of herself being the Mother of the Messias, or Christ; for it stood to reason, since He was so great, the Mother must be great, and good, and blessed too. Hence it was, among other reasons, that they thought so highly of the marriage state, because, not knowing the mystery of the miraculous conception of the Christ when He was actually to come, they thought that the marriage rite was the ordinance necessary for His coming.

Hence it was, if Mary had been as other women, she would have longed for marriage, as opening on her the prospect of bearing the great King. But she was too humble and too pure for such thoughts. She had been inspired to choose that better way of serving God which had not been made known to the Jews—the state of Virginity. She preferred to be His Spouse to being His Mother. Accordingly, when the Angel Gabriel announced to her her high destiny, she shrank from it till she was assured that it would not oblige her to revoke her purpose of a virgin life devoted to her God.

Thus was it that she became the Mother of the Christ, not in that way which pious women for so many ages had expected Him, but, declining the grace of such maternity, she gained it by means of a higher grace. And this is the full meaning of St. Elizabeth’s words, when the Blessed Virgin came to visit her, which we use in the Hail Mary: “Blessed art thou among women, and blessed is the fruit of thy womb.” And therefore it is that in the Devotion called the “Crown of Twelve Stars” we give praise to God the Holy Ghost, through whom she was both Virgin and Mother.