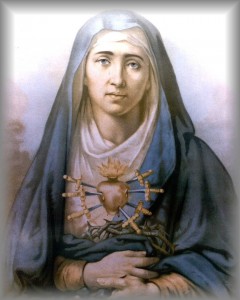 Commenting on Mary’s title Spiritual Vessel Blessed John Henry Newman comments that it means to be “spiritually-minded” which is to see things with faith and to live by faith. In particular he notes that to be such is to have spiritual conversation with God and his messengers, the angels. The Virgin Mary was comforted in her great sorrow by God himself and his angels. When we suffer we should remember that we are not alone and seek heavenly aid.

Holy Mary, Vas Spirituale, we wish to be spiritually minded like you. Come to us in our needs and pray for us that we may always live by faith.

May 20
Mary is the “Vas Spirituale,” the Spiritual Vessel

TO be spiritual is to live in the world of spirits—as St. Paul says, “Our conversation is in Heaven.” To be spiritually-minded is to see by faith all those good and holy beings who actually surround us, though we see them not with our bodily eyes; to see them by faith as vividly as we see the things of earth—the green country, the blue sky, and the brilliant sunshine. Hence it is that, when saintly souls are favoured with heavenly visions, these visions are but the extraordinary continuations and the crown, by a divine intuition, of objects which, by the ordinary operation of grace, are ever before their minds.

These visions consoled and strengthened the Blessed Virgin in all her sorrows. The Angels who were around her understood her, and she understood them, with a directness which is not to be expected in their intercourse with us who have inherited from Adam the taint of sin. Doubtless; but still let us never forget that as she in her sorrows was comforted by Angels, so it is our privilege in the many trials of life to be comforted, in our degree, by the same heavenly messengers of the Most High; nay, by Almighty God Himself, the third Person of the Holy Trinity, who has taken on Himself the office of being our Paraclete, or Present Help.

Let all those who are in trouble take this comfort to themselves, if they are trying to lead a spiritual life. If they call on God, He will answer them. Though they have no earthly friend, they have Him, who, as He felt for His Mother when He was on the Cross, now that He is in His glory feels for the lowest and feeblest of His people.