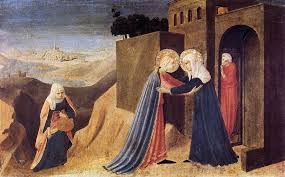 As can be observed in these commentaries on the titles of the Litany of Loreto, Cardinal Newman had a deep and tender devotion to the Mother of God. For the close of the month of May he comments on the title Morning Star. He notes that Mary is called by two names that convey her beauty: Mystical Rose and Morning Star. But the later suits her best because a rose belongs to the earth and has a short life. A star, instead, is high in heaven and abides forever.

He writes, it is “Mary’s prerogative to be the Morning Star, which heralds in the sun. She does not shine for herself, or from herself, but she is the reflection of her and our Redeemer, and she glorifies Him.”

Holy Mary, Morning Star, you always lead us to your Son, the Father and the Holy Spirit. Be always close to us, guiding us to the Blessed Trinity.

May 31
Mary is the “Stella Matutina,” the Morning Star—after the Dark Night, but always Heralding the Sun

WHAT is the nearest approach in the way of symbols, in this world of sight and sense, to represent to us the glories of that higher world which is beyond our bodily perceptions? What are the truest tokens and promises here, poor though they may be, of what one day we hope to see hereafter, as being beautiful and rare? Whatever they may be, surely the Blessed Mother of God may claim them as her own. And so it is; two of them are ascribed to her as her titles, in her Litany—the stars above, and flowers below. She is at once the Rosa Mystica and the Stella Matutina.

And of these two, both of them well suited to her, the Morning Star becomes her best, and that for three reasons.

First, the rose belongs to this earth, but the star is placed in high heaven. Mary now has no part in this nether world. No change, no violence from fire, water, earth, or air, affects the stars above; and they show themselves, ever bright and marvellous, in all regions of this globe, and to all the tribes of men.

And next, the rose has but a short life; its decay is as sure as it was graceful and fragrant in its noon. But Mary, like the stars, abides for ever, as lustrous now as she was on the day of her Assumption; as pure and perfect, when her Son comes to judgment, as she is now.

Lastly, it is Mary’s prerogative to be the Morning Star, which heralds in the sun. She does not shine for herself, or from herself, but she is the reflection of her and our Redeemer, and she glorifies Him. When she appears in the darkness, we know that He is close at hand. He is Alpha and Omega, the First and the Last, the Beginning and the End. Behold He comes quickly, and His reward is with Him, to render to everyone according to his works. “Surely I come quickly. Amen. Come, Lord Jesus.