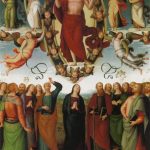 Blessed Cardinal John Henry Newman
What is the meaning of the Ascension of Christ? 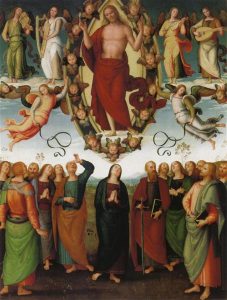 Jesus ascends to heaven and is glorified; he is now even closer to us because as God-man his presence is not limited to a particular place.

The first yet no less marvelous meaning for the Ascension is Christ’s glorification. Forty days after his Resurrection Jesus ascended into heaven. The Ascension is the completion of the Paschal Mystery. Jesus had prayed “Father, glorify your name.” Then a voice came from heaven, “I have glorified it, and I will glorify it again.” (Jn 12:28). Jesus receives the glory foretold by the Prophet Daniel: “To him was given dominion and glory and kingship.” (Daniel 7:13-14).[1] As in many other ways Jesus, the Son of God, fulfills all the Scriptures.

Another meaning for the Ascension is that it is the logical consequence of the Incarnation. The Eternal Son of God, who assumed human nature in the womb of the Blessed Virgin Mary, is the New Adam. As God-man it is only fitting that he would be the first to rise from the dead and the first to ascend into heaven.

Cardinal Newman sums up these considerations in one of his meditations:

O memorable day! The Apostles feel it to be so, now that it is come, though they felt so differently before it came. When it was coming they dreaded it. They could not think but it would be a great bereavement; but now, as we read, they returned to Jerusalem “with great joy.” O what a time of triumph! They understood it now. They understood how weak it had been in them to grudge their Lord and Master, the glorious Captain of their salvation, the Champion and First fruits of the human family, this crown of His great work. It was the triumph of redeemed man. It is the completion of his redemption. It was the last act, making the whole sure, for now man is actually in heaven. He has entered into possession of his inheritance. The sinful race has now one of its own children there, its own flesh and blood, in the person of the Eternal Son. (Meditations and Devotions)

Newman’s understanding of this great mystery is that through the Ascension man can now have a closeness to God that he did not have previously. In and through Christ man is united to God. His life is hidden in God. Newman invites us to rejoice at this spiritual union with the risen Christ now in heaven.

O what a wonderful marriage between heaven and earth! It began in sorrow; but now the long travail of that mysterious wedding day is over; the marriage feast is begun; marriage and birth have gone together; man is new born when Emmanuel enters heaven.

The departing Jesus does not make his way to some distant star. He enters into communion of power and life with the living God, into God’s dominion over space. Hence, he has not ‘gone away’, but not now and forever by God’s own power he is present with us and for us.” Jesus had promised that he would go but that he would come (Jn 14:28). “His going away is in this sense a coming, a new form of closeness, of continuing presence.” (Jesus of Nazareth, p. 283).

The pope continues: “Now he is no longer in one particular place in the world as he was before the ‘Ascension’: now, through his power over space, he is present and accessible to all – throughout history and every place.” (p. 284)

The saints invite us to experience the presence of Christ in the Holy Eucharist and in prayer. His presence is that of the risen Jesus who has ascended to heaven where he reigns with the Father and the Holy Spirit. Thus, after Christ’s glorification, the meaning of the Ascension is Christ’s presence or intimate closeness to each Christian and to the community of believers.

coming with the clouds of heaven.

And he came to the Ancient One

and was presented before him.

To him was given dominion

and glory and kingship,

that all peoples, nations, and languages

His dominion is an everlasting dominion

that shall not pass away,

and his kingship is one

that shall never be destroyed.