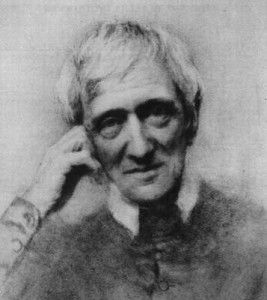 Most people admit that Newman was a theologian but few know that he was a philosopher. Newman had a philosophical mind and read widely on philosophy. At the end of 1858 he began a course of reading on metaphysics to write a book on philosophy of religion. Some years later he abandoned this projected work, titled Discursive Enquiries on Metaphysical Subjects, but his notes were compiled into a book, published posthumously as his Philosophical Notebook. He had studied in detail Aristotle’s Logic, Rhetoric and Nichomachean Ethics, which had a major influence on his thinking about knowledge as a personal possession and about knowledge as the grasping of existent realities, rather than abstractions. Newman acknowledged deriving from Aristotle ideas on moral duty and φρόνησις, or the personal prudential judgment. Regarding his own doctrine of the Illative sense, he wrote: “As to the intellectual position from which I have contemplated the subject (of human knowledge), Aristotle has been my master.”1

The study of Joseph Butler’s Analogy of Religion helped him to overcome a nominalist and rationalist reading of Aristotle, predominant at Oriel College. He was influenced by Butler’s notion of probability, without accepting the way Butler left it and thus avoided the mistaken claim of falling into skepticism.

From the Alexandrian Fathers, especially Clement and Origen, he was acquainted and influenced by the Neo-Platonic philosophy about the unseen world. He greatly admired Francis Bacon and his distinction between physics and natural theology, and had studied Isaac Newton’s Principia. He read English and Scottish philosophers, in particular John Locke, whom he considered a “highly respected adversary with whom he liked to discuss (figuratively) his own ideas.”2 On the surface it would seem that Newman had a few ideas in common with Locke such as making the individual, or self, the starting point of his whole philosophy, but the self and the God of Locke were completely rationalist and alien to the thought of Newman who opposed British Empiricism of which he considered Locke to be the founder.

When as a Catholic Newman studied in Rome he was disappointed to find that Aquinas and Aristotle were both in disregard. This circumstance, however, may have actually helped Newman to further his development of a type of personalism relying at once on both Ancient and Patristic sources and on modern empirical thought, particularly on associationist theories in psychology. From Abraham Tucker and Joshua Reynolds representatives of this theory of knowledge Newman may have taken the notion of the imagination as a cognitive power capable of giving us direct apprehension of individual objects with which we come into experiential contact.3 Through the imagination particular things can absorb the attention of the knowing subject, and the cognition is a personal and living relationship between the knower and the object. Knowledge is therefore more than reasoning; rather it is a real possession of the things we know. This was a key point for Newman’s argument for the existence of God, as well as his explanation of a person’s understanding of the articles of the Creed about the Blessed Trinity. Today his philosophical approach would be described as phenomenology or more specifically Christian personalism with elements of Aristotelian philosophy of the human mind and ethics.

In 1870 Newman published An Essay in Aid of a Grammar of Assent, a significant contribution to philosophy of religion, which he first began writing in response to the difficulties of William Froude, a Protestant friend who was losing his faith. The book was a culmination of Newman’s thinking about the philosophical nature of belief and certitude in the University Sermons.