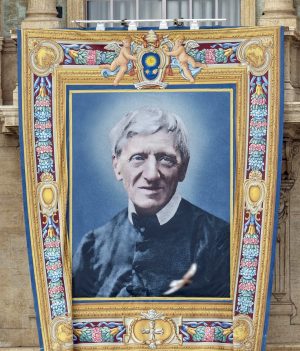 In less than a month the Church will celebrate the first anniversary of St. John Henry Newman’s canonization on October 13, 2019. His feast day, October 9, celebrates his Catholic conversion. On October 9, 1845, he was received into the Roman Catholic Church by the Passionist priest Blessed Dominic Barberi. As an established and esteemed priest of the Church of England, and already in a mild form of exile from Oxford’s halls embroiled in religious and political controversy, Newman found himself leaving a communion full of family and friends and entering the Catholic communion full of, in a significant sense, strangers. He had spent the whole of his life up to this point among Anglican friends and family, and after his conversion, with a new set of duties and demands, had to begin his social life from scratch. It would not be easy for a celibate gentleman in his mid 40’s to make such a drastic life-change and make new friends. After traveling to Rome where he was ordained a Catholic priest and formed ideas for the English Oratory, he returned to England and started the Oratory in Birmingham, an industrial city in the West Midlands with many poor Catholic immigrants. Around this time, on March 6 1848, he wrote a series of meditations on Christian Doctrine intended for Eucharistic adoration, one of which, taken from “Hope in God the Creator,” has become famous as a prayerful reflection (albeit modified):

God has created me to do Him some definite service; He has committed some work to me which He has not committed to another. I have my mission—I never may know it in this life, but I shall be told it in the next. Somehow I am necessary for His purposes, as necessary in my place as an Archangel in his—if, indeed, I fail, He can raise another, as He could make the stones children of Abraham. Yet I have a part in this great work; I am a link in a chain, a bond of connexion between persons. He has not created me for naught. I shall do good, I shall do His work; I shall be an angel of peace, a preacher of truth in my own place, while not intending it, if I do but keep His commandments and serve Him in my calling.

Therefore I will trust Him. Whatever, wherever I am, I can never be thrown away. If I am in sickness, my sickness may serve Him; in perplexity, my perplexity may serve Him; if I am in sorrow, my sorrow may serve Him. My sickness, or perplexity, or sorrow may be necessary causes of some great end, which is quite beyond us. He does nothing in vain; He may prolong my life, He may shorten it; He knows what He is about. He may take away my friends, He may throw me among strangers, He may make me feel desolate, make my spirits sink, hide the future from me—still He knows what He is about.

This beautiful reflection reminds us that Saint John Henry Newman is a model of discerning God’s providential will in every aspect of life, joys and sorrows, duties and desolations. As the decades have gone by, many have found much to admire, emulate, and contemplate in his life: a theologian, a poet, an historian, an educator, a convert, a journalist, a Tractarian, a homilist, a beloved friend, a church reformer, an Oratorian, a cardinal, and more. In these and all affairs, he conducted himself in a saintly manner, seeking first the things of heaven and all other goods in due measure. He pursued these things not for worldly gain but for God’s glory out of a sincere conviction that he had some “mission” to accomplish.

There is much in his life to find attractive; a man with such diverse skills, accomplishments and experiences can inspire many, and model sainthood in varieties of walks of life. And yet his mission did not merely span his long life from 1801-1890. On his tombstone at the Birmingham Oratory may also be found the inscription, Ex umbris et imaginibus in veritatem, “out of shadows and imaginings into truth.” The Church now celebrates that his life and vocation continue still in heaven, even more vibrant and potent than his earthly mission and ministry. The saints in the Church Triumphant have a special role in interceding for those still struggling in the “vale of tears,” the Church Militant on earth. While the Church Militant can pray for the Church Purgative, it is the special role of the Church Triumphant to pray for the Church Militant, creating a “link in a chain,” a “bond of connection between persons” that literally unites heaven and earth in the Body of Christ. Psalm 147 says that the “high praises of God” are in the mouths of the saints, and a “two-edged sword” is in their hand to carry out “vengeance” and “judgment,” protecting the humble and innocent as they strive toward heaven, and helping the fallen overcome sin.

There have been exciting indications of what St. John Henry’s ongoing earthly ministry from heaven looks like. He seems to show a particular care for expectant mothers, judging from the second miracle qualifying Newman for canonization: that of Melissa Villalobos, from bleeding and loss of a child during pregnancy. In 2014 the author of this reflection also asked the then-Blessed Newman to intercede for his wife and unborn child, whose lives were in danger from uterine infection, and both of whom survived. The causes for which saints are patrons do not always stem directly from their life on earth (although Newman did show a holy and tender love for his sisters, mother, and female friends); they may also arise from the devotion of the faithful and the saints’ responses to their particular needs. It is exciting to wonder what other miracles, conversions, and transformations of heart St. John Henry will continue to promote by God’s grace in answer to the petitions of the faithful in need. St. John Henry has a very big heart, and his own loving concern for others, in conformity with God’s will, can aid us in our struggle. His motto is cor ad cor loquitur: heart speaks to heart. His big heart continues to speak to hearts on earth, spilling over from contemplation of the Son, the Word made flesh, communion with whom we can now share as members of Christ’s Body.

As Newman might say, we can be inspired to sainthood not merely by an antiquarian fascination with the details of his life and works, but by devotion to a real person with whom we are connected in the body of Christ. Newman ends his famous sermon “Wisdom & Innocence,” with a prayer about the reality he now enjoys in heaven, reflecting our heavenly Father’s tender love for all His children, a love shared among them:

“May He support us all the day long, till the shades lengthen, and the evening comes, and the busy world is hushed, and the fever of life is over, and our work is done! Then in His mercy may He give us safe lodging, and a holy rest, and peace at the last!”