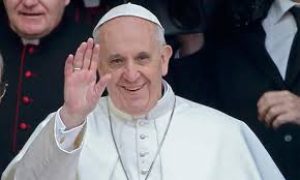 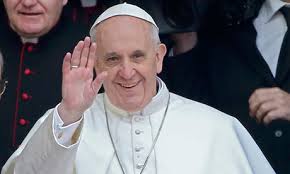 In difficult times God raises men and women to rouse the Church. What does the Spirit say to the Churches? Religious truths are always the same, but in every time there are specific questions and pressing issues. Today our world faces the dictatorship of relativism, the attack on marriage and the unborn, and most recently the drastic increase in displaced peoples and families.

The Catholic Church does not give specific remedies to the problems of our world, grave or small, but it teaches about Christ who is the Light of the world and shows us how to live as children of God. The pope, as the head of the Church, invites us to a deeper encounter with Christ and his Church. At the same time the pope asks us to acknowledge some moral truths derived from Christ’s teaching: peace among nations, service to the poor and marginalized people, respect for the marriage and the family, care for our common home.

Today Pope Francis addressed the joint Houses of Congress and the Supreme Court as a head of state. This was the first time of such an event. Speaking in English the Pope greeted Congress and the people of the U.S., “… the land of the free and the home of the brave.” He reminded the members of Congress that they are called to defend and preserve the dignity of their fellow citizens in the tireless pursuit of the common good. He spoke of Moses who leads us directly to God and transcendent dignity of every human being. He told the congressmen how they are charged to respect the image of God in every man.

The Pope invited a dialogue with men and women who with their work sustain the life of society through their work and the organizations they are part of, the elderly who share their wisdom and serve others through voluntary work, and with all.

Those who have served the American people at the cost and sacrifice of their lives teach us. The Pope singled out four people: Abraham Lincoln, Martin Luther King, Dorothy Day and Thomas Merton. Lincoln labored tirelessly that this nation would live in freedom. Our world today is an increasing place of violence and religion is abused by some. We must oppose fundamentalism, religious or of other types, safeguarding religious and intellectual freedom.

But he warned us of a polarization between good and evil. Our response should be one of hope and healing, peace and justice, resolving today’s economic and geopolitical problems and injustices. We must restore hope and move forward as one working together for the common good. We must respect our differences and convictions of conscience aware of how in our lands the different religions has greatly contributed. We must continue to listen to the voice of religion which is a powerful resource against new sources of slavery and injustice. The pope acknowledged the difficulty this involves but encouraged us in this effort.

The Pope referred to Martin Luther King’s march 50 years ago to obtain full rights for African-Americans. This dream continues to inspire us, and he expressed his happiness that America continues to be a land of dreams. Dreams that lead to action, to participation and to commitment. Millions of people came to this land pursuing dreams. The people of this country are not fearful of foreigners because most of us were once foreigners. The pope recalled that he was a son of an immigrant. Tragically the lives of those who were here before were not always respected. The pope expressed his esteem for them while noting that it is very difficult to judge the past. We must resolve to live as justly as possible, constantly relating to others and rejecting a mindset of hostility. He invited us to live in a spirit of reciprocal subsidiarity. The pope spoke of the magnitude and tragedy of refugee crises and of the many people coming to the United States seeking a better life for themselves and their loved ones. We must not consider them as numbers but as persons. We must see their faces and listen to their stories.

The pope invited us to remember the Golden Rule: Do unto others what you would like to have done unto you. He reminded us to use the same yardstick for others that will be used for us. We must protect and defend human life at every stage of its development. This extends to the effort to abolish the death penalty, and goal of rehabilitation.

The pope also spoke of the example of the Servant of God Dorothy Day, founder of the Catholic Worker Movement. Her social activism and passion for justice was inspired by the Gospel. We know much more must be done for social solidarity. The fight against poverty must be fought on many fronts. He also spoke of care for the earth, our common home – the subject of his recent encyclical – to direct our steps avoiding the deterioration of the environment caused by human activity. We can make a difference. The U.S. institutions can make a vital contribution in the years ahead.

The life and story of Thomas Merton served Pope Francis to speak about prayer. Merton was a man open to dialogue and a promoter of peace and people of different religions. In the face of failed peace processes we need to seek new opportunities of dialogue requiring courage and daring. We have to minimize and seek to end armed conflicts throughout our world, and ask why deadly weapons are sold to those who plan to inflict untold suffering on others. He ended speaking about the essential role of marriage and families in the building of this country and its culture, receiving a large ovation for his comments.

This wise address to our nations leaders recalls the addresses of Paul VI, John Paul II and Benedict XVI in their visits to the US. It was an invitation to justice and charity, respect for human life and the family.

Christianity has always influenced the moral customs and legislations of nations. In his time in the 19th century England’s Blessed John Henry Newman helped educated lay men to work in the field of education, defend the institution of marriage and protect the religious freedom of the Anglican community and later the Roman Catholic Church.

Newman from an early age lived by what he called doctrinal principle, the understanding that religion is based on objective truths revealed by God, not subject to opinions or consensus. Newman’s guiding principle is so important for contemporary society is faced with a crisis of reason: a skepticism about knowledge of the truth.

But for Newman religious truths translated into charity with the poor, the sick, the perplexed and sorrowful. It is the saints and other holy men and women who show us with their action and their words how to live the Faith and transmit it to others.

The Pope’s example and words are an invitation for each one of us live the Faith better with respect for all, cooperating with others in the care of the poor and the immigrant, working for peace in our world and protecting our common home.