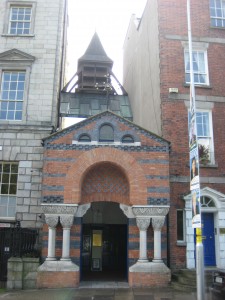 After presenting some highlights of the evangelization of Ireland and England in the sixth, seventh and eight centuries especially noting the roles played by the popes he jumps to the nineteenth century when Pope Pius IX established the Catholic University of Ireland (1854). He first paints a picture of the foreign relations between Pius IX and various European powers.

In the 1848 revolution Pope Pius IX did not appeal to the “coat-tails of Austria” subjecting the Church to Josephinism. Instead he went to exile in Gaeta, but in the end the Church gained freedom in Austria.

Neither did he accept the proposal by some for him to be the political head of Italy. “He steadily refuses to accept the insidious proposal; and at length he is driven out of his dominions, because, while he would ameliorate their condition, he would do so as a Father and a Prince, and not as the tool of a conspiracy.” France, which restored him to Rome also wishes to exert its power on the Papacy but the Pope would not bend.

During his exile in Gaeta the Pope studied the doctrine of the Immaculate Conception meeting with ridicule by some ‘that he had given up politics in disgust.’ Their astonishment was great when they saw his intense international influence summarized by Newman: “But soon they heard of other acts of the Holy Father; they heard of his interposition in the East; of his success in Spain; of his vigilant eye directed towards Sardinia and Switzerland in his own neighbourhood, and towards North and South America in another hemisphere; of his preachers spreading through Germany; of his wonderful triumphs, already noticed, in Austria and France; of his children rising as if out of the very earth in England; and of their increasing moral strength in Ireland, in proportion to her past extraordinary sufferings; of the hierarchies of England and Holland, and of the struggle going forward on the Rhine; and then they exchanged contempt for astonishment and indignation, saying that it was intolerable that a potentate who could not keep his own, and whose ease and comfort at home were not worth a month’s purchase, should be so blind to his own interests as to busy himself with the fortunes of Religion at the ends of the earth.”

Newman notes that in an age of professed light and liberalism ridicule gave way to anger and even fear against Catholics. He asserts that despite the political emancipation of Catholics in England, sixty years earlier it was believed in religious circles that Napoleon would annihilate the Pope. “In proportion to the weakness of the Holy See at home, became its influence and its success in the world. The Apostles were told to be prudent as serpents, and simple as doves. It has been the simplicity of the Sovereign Pontiffs which has been their prudence. It is their fidelity to their commission, and their detachment from all secular objects, which has given them the possession of the earth.”

Newman lists some popes who endured political crisis acting with wisdom and detachment from secular power.  They “have had a gift, proper to themselves, of understanding what is good for the Church, and what Catholic interests require. And in the next place, I find that this gift exercises itself in an absolute independence of secular politics, and a detachment from every earthly and temporal advantage, and pursues its end by uncommon courses, and by unlikely instruments, and by methods of its own.”

Reflecting on an age of transition in Europe with the rising power of England the extension of the English language, he notes that this language which is Protestant had been adopted by a Catholic race: “The English language and the Irish race are overrunning the world.”

Once again Newman praises the vision of the future, independence in policy and vigor in action characteristics of the Popes. With this in mind he is reassured by the Pope Pius IX choice of Ireland as “the seat of a great Catholic University, to spread religion, science, and learning, wherever the English language is spoken.” He is confident that despites difficulties, disappointments and delays the work begun at the Catholic University of Ireland will bear good fruits.

Newman, who was rector of the University for only a few years until 1858 could not foresee that it would be incorporated by a National state university in 1911. Nonetheless the vision of Catholic education of Pope Pius IX and Newman’s achievements in Ireland, are praiseworthy and continue to inspire many, particularly through Newman’s writings on university education.