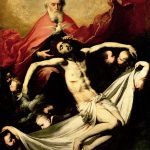 Blessed Cardinal John Henry Newman
Who do we Proclaim? Part 2 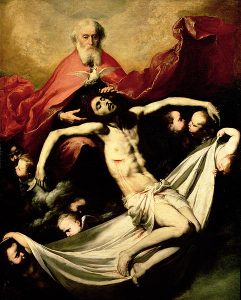 God is the deepest subject of reflection, and to try to understand His nature strains our minds.  But Blessed Newman, in his sermon on the “Mystery of the Holy Trinity,”  reminds us that Christianity, “gives exercise to the whole man,” our reason included, and we are to press on in using it to its full capacity.  In the first part of this reflection, we examined Newman’s thoughts on the Unity of God.  In this second part, we examine the Trinity of God.

Newman offers two illustrations (not parallels) of the Trinity built on the ground of our understanding of his Unity.  The first illustration uses our understanding of the attributes of God.  We see God as having love and wisdom, for example.  Yet, we know that God does not have these qualities, but that God is Love and God is Wisdom.  But we wouldn’t say that love and wisdom are the same.  Furthermore, Newman says:

In the second illustration, Newman asks us to use our imagination.  He asks us to imagine how a man – who has eyes and arms and ears and many different parts –  would look if he became spiritual: “A spiritual body might possibly be all eye, all ear, all arm, all heart; yet not as if all these were confused together, but because a spirit has no parts in extension, and is what it is all at once.”  Similarly, God is One like the spiritual body, and Three – not simply in name or attribute – but distinct in the way that the “root of a tree is from its branches.”

From the words of the Old Testament, it is clear that God is not simply One, and this even gained the attention of Jewish believers before Christ, Newman says.  We get a sense of this even from the human body, which has many parts but is one.  But this will take us only so far, for many of the allusions to the Trinity have no earthly analogy.  For example, what are we to make of “And the Spirit of God was moving over the face of the waters” (Gen. 1:2)?

We can only conclude what the Church declares, though our minds are unequipped to make plain what is a mystery. Newman summarizes those truths expressed in the Athanasian Creed:

We are rightly stunned into silence after these lofty thoughts.  It is not the silence of confusion, but the silence of bowing before the mystery of God, and of being with Him and in Him Who is not ours to comprehend but to adore.