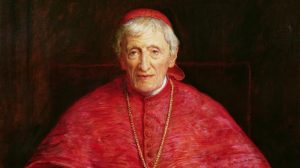 St. John Henry Newman, in a beautifully written sermon  delivered in 1837, warns his listeners of the danger of self-righteousness, and its converse: shunning religious practices that might lead to self-conceit.

Newman describes self-righteous men as those “who live to the world, and do not think of God.” They do not think about judgment and the future. They are content with the present, and only what is visible and tangible.

He keenly observes that persons who fix their mind on a particular object of religion “… narrow the field of duty, and make this object the measure of it …” rather than God. In this sense, they do not begin with the intention of being self-righteous but they mistake the part for the whole, certain observances for love of God. For example, they may confuse praying novenas or spiritual reading for love of God.

There is a danger of becoming self righteous for those who engage in frequent devotional practices as an end in itself instead of leading to a greater end, but rather than avoid such practices, which are good in themselves, they should exercise watchfulness to avoid spiritual pride. We might just as well avoid playing soccer or studying because of the danger of becoming proud over success.

In Newman’s own words: “I do not think, after all, that there is any very great danger to a serious mind in the frequent use of these great privileges. Indeed, it were a strange thing to say that the simple performance of what God has told us to do can do harm to any but those who have not the love of God in their hearts, and to such persons all things are harmful.”

First: “There is no satisfaction in perceiving that we are self-satisfied.” When we realize we are spiritually proud we can do something to correct this.

Second: Often being self-satisfied happens to persons beginning a religious course in life or taking more seriously religious life. Newman offers the following remedy: “Try to do your whole duty, and you will soon cease to be well-pleased with your religious state. If you are in earnest, you will try to add to your faith virtue; and the more you effect, the less will you seem to yourself to do.”

Third: People often object to devotional practices such as prayer, fasting and frequent communion, arguing that such things incline to self-righteousness. Newman notes that this is the objection of those who have not tried these practices, and that in fact it is not easy at all to pray, and to pray at all times, or to practice mortifications. Also the person who strives to live a serious Christian life is aware of his many imperfections and humbled by the thought of them.

Lastly, we should not shrink from our responsibility as Christians because we  fear becoming self-righteous.  This would be to act like the unprofitable servant who hid the Lord’s talent, and then faulted him for being a hard and austere man.

Newman concludes by inviting us to do God’s will, trusting in His graces and seeking that mysterious communion with Him Who died for us, rose again and now lives in our hearts, be it through prayer or devotions:

“Let us then compose ourselves, and bear a firm and courageous heart. Let us steel ourselves, not against self-reproach and self-hatred, but against unmanly fear. Let us feel what we really are,—sinners attempting great things, and succeeding at best only so far as to show that we do attempt them. Let us simply obey God’s will, whatever may befall; … He can bless and sanctify even our infirmities. He can lovingly chastise us, if we be puffed up, and He can cheer us when we despond.”