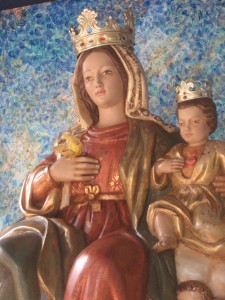 We have very sadly gotten almost accustomed to saying God’s name in vain or hearing others do so. There is little reverence in the way people dress and behave at church. There is a loss of the sense of the sacred and of the reverence due to God.

However “such a view is strange to most men; they do not realize the presence of Christ, nor admit the duty of realizing it. Even those who are not without habits of seriousness, have almost or quite forgotten the duty.” Newman presents two classes of men who act without reverence towards God:

“First, those who think that they never were greatly under God’s displeasure; next, those who think that, though they once were, they are not at all now for all sin has been forgiven them;—those on the one hand who consider that sin is no great evil in itself, those on the other who consider that it is no great evil in them, because their persons are accepted in Christ for their faith’s sake.”

In the first group there are person who think that Catholic Creed is too strict “who say that it matters not what a man believes, so that his conduct is respectable and orderly,—who think that all rites and ceremonies are mere niceties (as they speak)” and will go as far as to doubt the doctrine of Christ’s atonement or divine nature. The other class of men do not doubt these doctrines and think they were once sinners but they consider that God has so absolutely forgiven them that they have nothing to be answer for at the Last Day.

In sum the first group is made up of persons who espouse doctrinal and moral relativism, and the second of those who presume of God’s mercy.

Both groups have in common the consideration of:

God as simply a God of love, not of awe and reverence also,—the one meaning by love benevolence, and the other mercy; and in consequence neither the one nor the other regard Almighty God with fear; and the signs of want of fear in both the one and the other.

Newman offers a long list of examples of this lack of fear of God, which serves as an examination of conscience for all of us. He enumerates the following faults:

-Speaking freely of Almighty God and using his name familiarly.

-Speaking in a casual way of the mysteries of God or arguing about them.

-Stating what Almighty God must do or what he cannot do.

-Presumptuously speaking about their conversion and God’s pardon.

-Being unwilling to bow at the name of Jesus as prescribed by St. Paul.

-Referring to Christ as only a man.

-Addressing our Lord in an overly familiar tone or praying in a pompous manner.

-Acting with irreverence in speech or posture in church.

It is evident for Newman that the religion of his day, like ours today, “is destitute of fear.” Together with this absence of reverence for God there is widespread disobedience of his commandments and a neglect of the sacraments. People are wanting in awe and fear of God.

the class of feelings we should have,—yes, have in an intense degree—if we literally had the sight of Almighty God; therefore they are the class of feelings which we shall have, if we realize His presence. In proportion as we believe that He is present, we shall have them; and not to have them, is not to realize, not to believe that He is present. If then it is a duty to feel as though we saw Him, or to have faith, it is a duty to have these feelings; and if it is a sin to be destitute of faith, it is a sin to be without them.

Newman considers that this way of acting is due to a lack in “consciousness of God’s presence,” and makes the following comparison to our reaction to the absence of a person we know:

When a person is absent, we are tempted perhaps confidently to say what his opinion is on certain points;—but should he be present, we qualify our words; we hardly like to speak at all, from the vivid consciousness that we may be wrong, and that he is present to tell us so. We are very cautious of pronouncing what his feelings are on the matter in hand, or how he is disposed towards ourselves; and in all things we observe a deference and delicacy in our conduct towards him. Now, if we feel this towards our fellows, what shall we feel in the presence of an Angel? and if so, what in the presence of the All-knowing, All-searching Judge of men? What is respect and consideration in the case of our fellows, becomes godly fear as regards Almighty God; and they who do not fear Him, in one word, do not believe that He sees and hears them.

Although we do not see Christ we believe that he already came in the flesh and is invisibly present to us.

The thought of our Saviour, absent yet present, is like that of a friend taken from us, but, as it were, in dream returned to us, though in this case not in dream, but in reality and truth. When He was going away, He said to His disciples, “I will see you again, and your heart shall rejoice.”

For Blessed Newman the state of mind of those who feel the invisible presence of Christ yet believe that he is at the right hand of God is that of joy and pain, of awe and wonder, which is called “fear.” He concludes “that godly fear must be a duty, if to live as in God’s presence is a duty,—must be a privilege of the Gospel, if the spiritual sight of “the King in His beauty” be one of its privileges.” And this is why “The fear of the Lord is the beginning of knowledge.”

Almost a century after Newman’s Parochial and Plain Sermons St. Josemaría Escrivá, while maintaining intact the truth about God’s grandeur and the creature’s response to its Creator, added an important element to Christian understanding of fear of the Lord. This holy priest described the fear of the Lord as a filial fear, which, above all, is a fear of displeasing God who is our Loving Father. It is a fear filled with trust in God.

As we continue this season of Advent it is good to examine ourselves to see if we have a lively awareness of the real presence of Christ, and at the same time a filial fear of the Lord. Let us strive to make acts of faith manifested in our ways of acting and talking, and in our religious worship, realizing that “to come often to the most Holy Sacrament, is an act of faith; and to be still and reverent during that sacred service, is an act of faith.”